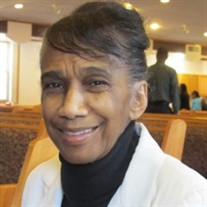 On May 17, 1936, in Evanston, Illinois, “Big Momma” delivered a beautiful baby girl and named her Margaret Elizabeth, deriving her name from a queen. Born to John Robinson and Net Lee Settles, she became extraordinary from birth. She was the second child of seven. Growing up in Battle Creek, Michigan, she developed a love for books, reading, swimming and skating. At the age of 15, she married Weldon Neal. To this union, four beautiful children were born; Lorna, Deanna, Lorenzo, and Angela, who died at 3 months as a result of crib death. The remaining three children gave her the determination to enter and complete barber school in Detroit. Margaret’s educational journey was difficult, but she finished it within a year, living off of water and peanuts. After obtaining her degree and license, she moved her family to Jackson, Michigan. She began her career as an employee at Faulkner’s Barbershop and later worked for Dot’s Barbershop. Margaret was the second lady barber in the city. She eventually became an entrepreneur, owning several homes and a barber business, called “Margaret’s Barbershop.” On January 20, 1968, Margaret married Walter Robinson and had more children; Lisa, Michele, Mia, and Maria. Unfortunately, Maria did not live beyond birth. During this time, Margaret gave her life to the Lord, loving Him with all her heart. She turned her attention from the world of fame and materialism to a dedicated life of faith. She became known as a “prayer warrior,” because of her consistency in prayer and fasting. She spent her life traveling to fellowship meetings, supporting the pastor in evangelistic efforts and making house visits to support those in distress. In the church, she served as a janitor, altar worker, and missionary. She initiated many church fasts and coordinated morning services for years. Margaret was joined in matrimony to Pastor Frank Hampton, Jr. on September 4, 2011. They enjoyed six beautiful years together, traveling to revivals, fellowship meetings, and other church-related events. On December 26, 2017, Sis. Hampton passed away from this life in the early hours of the morning. She was preceded in death by her parents; John Robinson and Net Lee Settles, her siblings; Bernard “Poncho” Harris and Joyce Smith, and her daughters; Angela Neal, Maria Robinson, and Lisa Acree; husbands; Weldon Neal and Walter Robinson, sons-in-law; David Hall and E. John Warren, and special friends; Barbara Jean Jeffries Herndon and Doris Burke. Margaret leaves to cherish her memory her dear husband; Pastor Frank Hampton, Jr., her children; Lorna Hall, Deanna Range, Lorenzo Neal, Michele Warren, and Mia (Basil) Hampton, her siblings; John (Toby) Robinson, Elyse Evon Jones, Fredrico (Tammy) Porter and Kevin (Marvel) Porter, a host of grandchildren, great-grandchildren, and great-great-grandchildren, many stepchildren, a special step-daughter; Marsena Hampton Covington, special friends; Deanna Bradshaw, Juanice Hall, Coretta Sisson, and Linda Robinson, and a special family; the Jeffries.

On May 17, 1936, in Evanston, Illinois, &#8220;Big Momma&#8221; delivered a beautiful baby girl and named her Margaret Elizabeth, deriving her name from a queen. Born to John Robinson and Net Lee Settles, she became extraordinary from birth.... View Obituary & Service Information

The family of Margaret Elizabeth Hampton created this Life Tributes page to make it easy to share your memories.

Send flowers to the Hampton family.