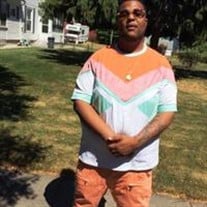 Malik Dondre Dearing 26 of Jackson, Michigan was born November 27, 1992 to Charlette Deloach and ReginaldDearing. He died Tuesday, November 12, 2019, upon arrival at Henry Ford Allegiance Hospital. Charlette Deloach moved to Jackson, Michigan from Chicago, Illinois on November 12, 1992. She was 9 months pregnantwith Malik and wanted a better life for her and her sons. She went on to give birth to Malik 2 weeks later on November 27thand the journey began. He was always her most spirited mischievous child but with good heart, great laughs and beautifulsmile. He made you laugh as much as he made you fuss. For those who knew him, they loved him as a big teddy bear orgentle giant. Malik always showed how much he cared about his family and friends. Malik attended Jackson Public Schools and earned his GED in 2011. Malik enjoyed reading, recording music, watchingmovies, and spending time with his family and friends. He loved to wear designer clothes and shoes that complimented himvery well. Every day he woke up “it was all about the Benjamin’s”, as he would say. Malik’s purpose on this earth was toprovide for and protect his family, and to succeed in his music. He will forever remain in our hearts. Malik was preceded in death by Romeo Gibson his close childhood friend who he considered a brother. Malik is survivedby his Mother; Charlette Deloach, his Father; Reginald Dearing (Stephanie), grandmother; Georgia Deloach, brothers,James Ellzey, Jr., Marquan Dearing, Reshawn Colton, Kentral Bailey, Diontae Bailey, and Jaquan Bailey, Sisters;Treneare Bailey, Dominque Bailey, and Imani Dearing, his three children; Malik Dondre Dearing, Jr. (Shakenna Parker),and Meilani Brielle Dearing, step-daughter; Serenity (Briahna Mitchell), Mi’Yami Majeek Dearing; aunties: Lakeisha Deloach,Shalana Deloach, and Shalikia Deloach, Uncle; Courtney Deloach, a special cousin; Rasheeema Deloach, specialclose childhood friends: Davanti Heard-White, Demetrius Heard, Bradley Gant, Dominque Faulkner, Tirique Faulkner,Mario Bell, and Donald Williams, also numerous other cousins, friends, nieces and nephews.

The family of Malik Dondre Dearing created this Life Tributes page to make it easy to share your memories.

Send flowers to the Dearing family.