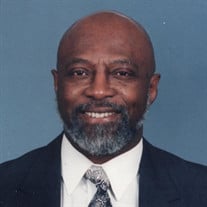 Lynard Oliver, Sr. was born on January 9, 1943 to Edward and Viney Oliver in Sylvania, Georgia. As a child, his favorite activities were hunting, fishing and gardening with his mother. At age 13, Lynard dedicated his life to the Lord at Jordan Baptist Church in Sylvania, Georgia. As a young adult attending Jackson High School, he was an avid wrestler and fierce competitor. After graduation, he studied business at Jackson Community College and years later graduated with a bachelor’s degree from Spring Arbor College. As a vibrant adult he worked closely with his brother Wendell at the “Oliver’s Body Shop.” In 1962, Lynard enlisted in the United States Army and after basic training, joined the 101st Airborne Division. Notably, he served as a paratrooper in the Vietnam War. After the war, Lynard resettled in Jackson, and partnered with his brother Elward and opened “Ebony Record Shop” where they sold vinyl records, 8 tracks and cassettes to the public. He later opened “The Milky Way” ice cream parlor’ that served some of the best sandwiches, hamburgers and milk shakes in the area. It also gave him pride to have established his business next door to his brother Raleigh who owned ‘The Arcade’ business. In conjunction with Lynard’s entrepreneurial activities, he celebrated 20+ year career with Kelsey Hayes as one of the first black managers and received several awards and acknowledgements for product inventions and perfect attendance. Lynard loved the Lord and served as a Trustee at Second Missionary Baptist Church under Rev. Amos Polk Williams in Jackson, Michigan. He was later ordained as a Deacon at Christian Tabernacle Baptist Church under Pastor Larry Davis in Ypsilanti, Michigan. Lynard completed his service back at Second Missionary Baptist Church under Pastor Darius Williams in Jackson, Michigan. Along with the Lord, Lynard also loved his wife Lubertha. On February 11, 1978, they were married at Second Missionary Baptist Church under Amos Polk Williams and they recently celebrated 43 years of marriage. Lynard is survived by his wife, LuBertha and four children, Anthony Oliver, Quindolyn Oliver, Lynard (Tarsha) Oliver II , and Adia “Strawberry” (Lashawn Hicks) Oliver; four grandchildren, Makayla “Lynae,” Lynard III, Amir, and Lydia; four siblings, Wilhelmena (George) Bryd, Wendell (Hattie) Oliver, Janet Nichols, and James Bernard Oliver; and sisters-in-law, Marie Oliver, Ella Jean Oliver, Albertha Oliver, Ethel Kelly, Nell McKnight, Mary Bradley, Doris Gossett; brothers-in-law Willie James, and Earl Bradley. He was preceded in passing by his parents; four siblings, Raleigh Oliver, Elward Oliver, Rodell Oliver, and Wilmotine Oliver; and two brothers-in-law, Robert L. Nichols Sr., and Abraham Bradley. Lynard “Papa” will be greatly missed by all his family and friends. He really enjoyed making fruit cakes to share during Christmas time and played with creating original food cuisines. Being a man of few words, Lynard was a strategic thinker, detail oriented with a competitive loving spirit. He will be remembered as a devoted husband and father who cherished spending time with his family.

Lynard Oliver, Sr. was born on January 9, 1943 to Edward and Viney Oliver in Sylvania, Georgia. As a child, his favorite activities were hunting, fishing and gardening with his mother. At age 13, Lynard dedicated his life to the Lord at Jordan... View Obituary & Service Information

The family of Lynard Oliver Sr. created this Life Tributes page to make it easy to share your memories.

Send flowers to the Oliver family.