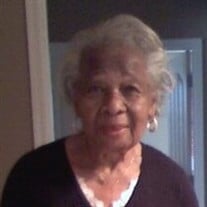 Lula Mae Sims, of Jackson, Michigan, returned to rest with Jesus on March 28, 2018. She was born on December 9, 1923 in Water Valley, Mississippi, to Charlie Williams and Ora D. Suggs Williams. She moved to Jackson from Sallis, Mississippi and worked in a custodial capacity at the Michigan and GKC theaters. She was married to Sterling Sims in 1947. As one of 11 children that grew up on a farm in Mississippi, Lula Mae enjoyed gardening. She canned vegetables and her sweet pickles were enjoyed by many. She traveled annually to California to stay with her sister Cathryn during the holidays. Known for her incomparable style of clothing and beautiful hats, Lula Mae was a very active member at Community AME Church and participated in many fundraising Teas. A friend and caregiver to anyone she met, Lula Mae was adored by all and will be greatly missed. She was preceded in death by her parents, her husband; Sterling Sims, her daughter; Claudette Rodgers, and the following siblings; Charles Williams Jr., Christine Perrin, and Oscar Williams. Left to cherish her memory is her son; Gregory Sims of Jackson, Michigan; her grandchildren; Sean (Trina) Rodgers of Santa Clarita, California, Komika Sims of Austin, Texas, Sterling Q. Sims of New Iberia, Louisiana, and Valencia Clark of Carmel, Indiana, Great-grandchildren; Jazmin Rodgers, Shamaria Rodgers, Jeremy Hayes, Regan Sims, and Zavier Clark, Great-great-Grandchildren; Jordyn Rodgers, and Kadynce Burton. She is survived by her siblings: Cathryn Williams of Pacoima, California, Thomas (Nancy) Williams of Jackson, Michigan, James Williams of Grass Lake, Michigan, Samuel “Sammie, Sugarman” (Elaine) Williams of Jackson, Michigan, Callie Mae Roundtree of Milwaukee, Wisconsin, Lois (Julius) Nobles of Ellenwood, Georgia, and Mary H. (William) Bentley of Detroit, Michigan. She was loved by her nieces and nephews who affectionately called her “Aunt L”.

Lula Mae Sims, of Jackson, Michigan, returned to rest with Jesus on March 28, 2018. She was born on December 9, 1923 in Water Valley, Mississippi, to Charlie Williams and Ora D. Suggs Williams. She moved to Jackson from Sallis, Mississippi... View Obituary & Service Information

The family of Lula Mae Sims created this Life Tributes page to make it easy to share your memories.

Send flowers to the Sims family.