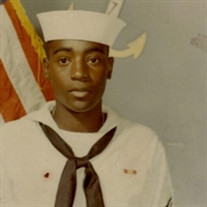 Louis “Sonny” McCreary, Jr. was born on December 16, 1951 in Detroit, Michigan to Louis McCreary, Sr. and the late Gladys McCreary. He attended St. Martin’s Catholic School of Detroit, Michigan. Upon graduation from St. Martins, he enlisted in the United States Navy at the age of 18, seeing combat in the Vietnam War. It was after his honorable naval discharge, that he welcomed daughter, Kimberly Parker into his life. Thereafter, Sonny met, fell in love, and married his wife, Victoria “Vicky” Lynn Wilkaryasz on December 7, 1974. It was during this union that the two welcomed their son, Brian McCreary. The two were inseparable and remained married until her death on March 11, 1986. Sonny was creative, hard-working, brilliant, charismatic, and an outgoing person who valued relationships with people and having fun. He enjoyed and excelled at chess. He also loved history and music. His other talents and past times included bowling, billiards, reading, checkers, but his greatest love was for his family and friends. Sonny, being the entrepreneur that he was, founded Michigan Home Improvement, during the 1990’s. His company brought him great pride and joy throughout its years of service. In time Sonny married Johnnie Elaine Woods on December 10, 2004. He regarded her as his best, longest, and most endearing friend. Louis was preceded in death by his siblings; Ozell “Leg” Davenport and Velma McCreary-Hall. Louis is remembered in love by his, daughter; Kimberly Parker, son; Brian McCreary (Tiffany), grandchildren; Camri, Brian, Jr., and Kenadie McCreary, father; Louis McCreary, Sr., siblings; Shirley Lee (Samuel), Emma McCreary and aunt; Lucille Nelson (Bill), and a host of nieces, nephews and other relatives and friends; a very special ex-wife and friend; Johnnie Elaine Woods and children; James, Lou Ed, and Jennifer Woods.

The family of Louis McCreary, Jr. created this Life Tributes page to make it easy to share your memories.

Send flowers to the McCreary, family.