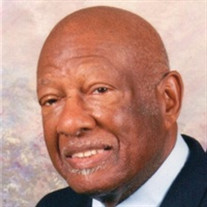 The Legacy Lonnie C. Jenkins was born November 11, 1929 in Alexander City, Alabama to the parents of Mance and Alma Jenkins. Upon graduating from high school, Lonnie left his hometown and resided in Sharon Pennsylvania before joining the United States Air Force. Lonnie served in World War II and received a Honorable Discharge.  He settled in Cleveland, Ohio where he met and married the love of his life Vercie Stewart. Three children were born to this union:  Darryl, Kimberly & Courtney. Lonnie was employed and retired after 35 years of service with the United States Postal Service. During this time, he owned and operated his own landscaping business for 25 years. Exercising one of his greatest gifts from God; Lonnie saw the need and the Mt. Pleasant Church of God Bus Ministry was birthed. Through prayer and deep commitment to God, the Bus Ministry grew from one van to four 48 passenger seat buses. As a result of his 30 years of overseeing the bus ministry not only were many souls saved but his legacy lives on even to this day. The spirit of the Lord that shined upon him resonated with others and his smile was always infectious! Of the many hats worn, Lonnie served Mt. Pleasant Church of God as an Elder, Chairman of the Trustee Board, Men’s President, and a Faithful Volunteer of the Sick and Shut in Ministry. Committed to the call of God, Lonnie not only served his local church but also worked as a member of the National Association of the Church of God’s Board of Directors, while filling the position of the Trailer Court Manager for the West Middlesex Campground. Lonnie would often be found cleaning, painting, and maintaining the campground. He worked diligently to ensure the grounds were presentable and appealing for the annual Camp Meeting. As a man of integrity, honor, distinction, devotion, faith, and true servant of the Lord, he never expected any compensation for his services. Jenkins Drive (located on those same campgrounds) will forever be an honorable mnemonic of his loyalty, dedication and service to others. Left to continue his legacy is his wife of 63 yearsVercie Jenkins, Darryl-son (Jerri Jenkins), Kimberly-daughter (Calvin Waddy), Courtney-son (Terra Jenkins). Grandchildren: Sharmia Adams, Alexia Jenkins, Armenthie Jenkins, Corbin Jenkins, Calvin Waddy III, Austin Waddy, Benjamin Jenkins, Matthew Waddy, Quincy Jenkins Great Grandchildren: Cachae Fisher, Jayce Kholle Lonnie was preceded in death by his parents, Mance and Alma Jenkins. Being one of sixteen children, eleven siblings also preceded him in death. His remaining siblings are: Marynell Jenkins-sister, Vontwill Macklin-sister, Edlean Givins-sister, and Tommy Jenkins-brother. Adopted Children: The family of Derrick and Isolyn Thompson. Special Thanks: Phyllis Miller and Duane (Donna) Stewart. Your sacrifice will always be remembered and the family will forever be grateful to you for your love and support. Lonnie was deeply loved and will be missed by host of nephews, nieces, cousins, family and friends.  He ran his race and finished his course. What a marvelous example of a husband, father and friend. We salute Lonnie C. Jenkins, a true man of God.

The Legacy Lonnie C. Jenkins was born November 11, 1929 in Alexander City, Alabama to the parents of Mance and Alma Jenkins. Upon graduating from high school, Lonnie left his hometown and resided in Sharon Pennsylvania before joining the United... View Obituary & Service Information

The family of Lonnie Cortez Jenkins created this Life Tributes page to make it easy to share your memories.

Send flowers to the Jenkins family.