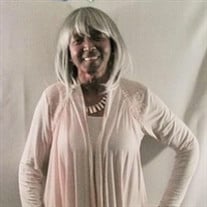 Linda Rosemary Burton, age sixty-six, of Jackson, Michigan was born in Aldrich, Alabama on December 20, 1950 to Troy and Catherine Wright. She crossed over to be with the Lord on Saturday, September 2, 2017. Linda was preceded in death by her father; Troy Wright. Linda was married to Cleo Sylvester Burton on April 12, 1967; two children were born to this union, Alesha and Lindall. Later in life she was married to Freddie Connor, whom also preceded her in death. Linda was a preschool teacher and daycare worker; she took pride in working with the children and young people. Linda enjoyed traveling and her heart’s desire was to live in Phoenix, Arizona, where she lived for several years before returning to Michigan to be closer to her family. She loved spending time with her family playing cards, dominos, and chess. She also enjoyed live entertainment such as music, concerts, plays and museums. Gazing at the water at Belle Isle Park was another favorite pastime of hers. Linda had a voice that could bring comfort to others, the gentle way that she said 'Sweetie' would make anyone feel special. Her motto in life was “Find the emotions of hope, harmony, and understanding in life so that peace will come, because we all need peace to make us feel better”.She leaves to cherish her memory her mother; Catherine Wright-Hall, her two daughters; Alesha (Jason) Gibson and Lindall Burton, her siblings; Ronald (Gwen) Wright, Randy (Darlene) Wright, Beatrice (James) Williams, and Kathye (Wade) Harris, seven grandchildren; Onaysha, Christopher, Ronnell, Rachard (Brittany), Charles, Eternity, and Lauriyale, twelve great-grandchildren; Mi'Shaun, Mi'Raun, Jayda, Trendon, Landon, Isaiah, Rheonna, LaSharah, Keyoni, Christopher, Miyani, and Christiana, and a host of nephews, nieces, cousins, and friends.

Linda Rosemary Burton, age sixty-six, of Jackson, Michigan was born in Aldrich, Alabama on December 20, 1950 to Troy and Catherine Wright. She crossed over to be with the Lord on Saturday, September 2, 2017. Linda was preceded in death by her... View Obituary & Service Information

The family of Linda Rosemary Burton created this Life Tributes page to make it easy to share your memories.

Send flowers to the Burton family.