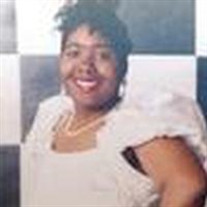 Lillian Sylvia Brown was born on June 21, 1974 to Walter and Minnie Lee Brown in Detroit, Michigan. At the age of three, her family moved to Oak Park, where she grew up. As a young girl, she liked riding her bike, spending time with her family, and playing with friends in the neighborhood, and would later graduate from Jardon High School in Ferndale, Michigan. She was preceded in death by her mother Minnie Lee Brown. Growing up the only girl of five children, she was the apple of her parent's eye. She really enjoyed her mother's homemade cupcakes while watching television and the special trips to the school where her mother worked. The loving relationship she shared with her father was a very special one and depicted the true meaning of "Daddy's little girl". They would talk on the phone several times each day and she could always count on him to be there for her. He never hesitated to provide her with anything that she needed. Although she had many brothers, Lillian was closest to her younger brother Brian. She loved him dearly and they had many fun and entertaining moments together. They always celebrated every birthday together by going out for a wonderful dinner and exchanging gifts. Lillian was baptized by Pastor Michael Coleman, PhD and was a member of Greenfield Avenue Church of God in Detroit, Michigan. She also enjoyed spending time at the community center doing arts and crafts, playing bingo and hanging out with her friends. She had a very strong and caring nature, with a smile would light up a room and she will be missed. Lillian leaves to cherish her memory her parents; Walter and Thelma Brown, her bothers; Walter II (Michelle), Mark, David and Brian Brown, Malik (Carmen) and Abdul Hawkins, Raquib (La Cheldra) and Ramir (Shanette) Luckie; her sisters; Robin Tennille and Roslind Hawkins, trusted and loving friends Cynthia and Meaghan Gilliam, as well as several nieces, nephews, cousins, caregivers and friends.

Lillian Sylvia Brown was born on June 21, 1974 to Walter and Minnie Lee Brown in Detroit, Michigan. At the age of three, her family moved to Oak Park, where she grew up. As a young girl, she liked riding her bike, spending time with her family,... View Obituary & Service Information

The family of Lillian Sylvia Brown created this Life Tributes page to make it easy to share your memories.

Send flowers to the Brown family.