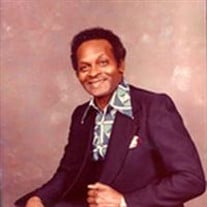 Lester Johnson was born April 10, 1931 to the union of Tilman & Harriet Johnson in Arpe, Texas. He was the youngest of three siblings, which also included Nelline Baldwin and Evelyn Tyler. Lester’s parents and sister Evelyn Tyler preceded him in death. In 1945 the entire family relocated from Texas to Michigan. Lester was educated in the River Rouge School System. He was a master of many skilled trades such as mechanics, electrical, and plumbing. He was kind, and excelled at whatever he put his hands to. Lester’s passions were traveling, motorcycles, skating, and beautiful women. He had an abundant love for life, worked hard, and lived his life on his own terms. Lester was married to Mattie and to this union a set of twins were born; Kenneth & Arlinda. He was a best friend to his only daughter Arlinda, and she has many memories of special times spent with him. He was the best father to his children, always available to help with his grandchildren. He took his time doing things, but he was very dependable. He showed his children how to be dependable and self sufficient. Lester was an animal lover, and kept a lot of dogs throughout the years. Lucky his last dog, was with him until the end, and was inherited by Arlinda, and she feels as if her father lives on in Lucky. Lester leaves to cherish his memory two children; Arlinda and Kenneth, four grandchildren; Tracy, Christopher, Anthony and Keisha, one great-grandson; Martise, sister; Nelline Baldwin, nieces, nephews, extended family and friends. He had a special nephew Donald Baldwin, whom he spent a lot of time with tinkering in the garage & learning valuable life lessons.

The family of Lester Johnson created this Life Tributes page to make it easy to share your memories.