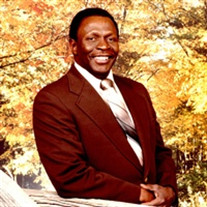 Leroy Amos, 86 years old, was born on August 14, 1931 in Jackson, Mississippi to William and Emma Amos, the youngest brother of thirteen siblings. He moved to Albion, Michigan as a teenager. He was enlisted in the U.S. Army where he fought in the Korean war. He had several jobs during his lifetime, including being a “Cherry Picker”, a pin setter at the local bowling alley. He was also employed at Malleable Foundry and Corning Glassware in Albion, Michigan, as well as by factories in Jackson, Michigan. Leroy later started his own business, Amos Janitorial & Painting Service, where he was able to establish contracts with the hospital, a bank, car dealerships, apartment complexes and other businesses. Leroy, along with his wife Ilene, also had several rental properties. He was a member at the American Legion Sauk Trail Post No. 246 in Jackson, Michigan where he also served as the Commander. He loved having nice cars and watching sports. Leroy was an excellent dancer and he enjoyed playing pool, dominoes and a game of cards. Leroy peacefully made his transition to his eternal rest on Sunday, January 21, 2018 at Regency Care Home in Whitmore Lake, Michigan under Hospice Care. He was preceded in death by his parents, twelve siblings and five of his children; Bonnie Jean Amos, Earl Dernell Amos Sr, Dianna Annette Amos, Leroy Amos-Smith, Jr, and Peggy Gibson. He leaves to cherish his memories his wife; Ilene Amos, his children; Deanna (Lawrence, Sr.) Bradshaw, Michael Amos, Yolunder Amos, Maurice Amos, Vivian Johnson, Darlene Turner, Lonnie (Laura) Long, Danny Long, and Jacqueline Long, two grandchildren that he raised as his own; David Turner and Martine Stevenson, and a host of grandchildren, great-grandchildren, nieces, nephews and other relatives and friends.

Leroy Amos, 86 years old, was born on August 14, 1931 in Jackson, Mississippi to William and Emma Amos, the youngest brother of thirteen siblings. He moved to Albion, Michigan as a teenager. He was enlisted in the U.S. Army where he fought... View Obituary & Service Information

The family of Leroy Amos created this Life Tributes page to make it easy to share your memories.

Send flowers to the Amos family.