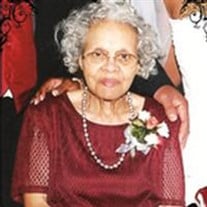 Lela Theola Cox, of Jackson, was born February 26, 1918 in Villa Ridge, (Pryor Town), Illinois. She was the oldest of eight children born to the union of Chester and Willie T. Moore- Hurt. She moved to Jackson and united in marriage with Dillard Cox on January 15, 1949. To this union nine children were born. Upon moving to Jackson, she united with Bethesda C.O.G.I.C. under the late Elder Jefferson. She later united with the Second Baptist Church under the pastorate of the late Pastor A.P. Williams, and was a faithful member until her health no longer permitted. She was active in Missionary Circle #1 and Sunday school. Theola was also a member in the Order of the Eastern Star. Theola enjoyed, quilting, gardening, and sitting on the porch with a glass of ice tea. She worked briefly as a teacher’s aide at McCulloch School. She also baby sat various children and allowed many just to come over and play while their parents were gone shopping. Theola was a loving and patient wife, mother, grandmother and great grandmother. She relished reading to her children when they were small. She made homemade biscuits or cornbread nightly, baked a pound cake many Sundays and often threw in some peanut butter or pineapple drop cookies during the week. She also made a delicious peach cobbler and some mean dinner rolls but, not often enough. In between, she washed and hung hundreds of loads of laundry on the clothes line, which will make you tired just thinking about it. She also patched many knees on jeans, elbows on shirts, as well as scratches and scrapes on children. On Monday, January 4, 2016, Theola was called to her heavenly home. She was preceded in death by her husband of 31 years, Dillard, (1904-1980) a son, Baby Boy Cox, her parents, three brothers, Dexter Hurt, Virgil Hurt, William Hurt, one sister, Fern Hurt Waddy. In her passing, she leaves eight children; Dillard Burton, Carolyn S. Cox-Greene, Michael C., Ester Denise, Benjamin, and Mary Ann Cox all of Jackson, Michigan, Emerson Allen Cox of Auburn Hills, Michigan, and Donald F. Cox of Lansing, Michigan, one sister; Zelma A. Flanagan, of Lansing, Michigan, two brothers; Vernon Arthel Hurt, and George Hurt of Jackson, Michigan, one sister-in-law; Rosie Bell-Hurt, of Peoria, Illinois, and a number of grandchildren, great grandchildren and an army of nieces, nephews, cousins, family and friends.

Lela Theola Cox, of Jackson, was born February 26, 1918 in Villa Ridge, (Pryor Town), Illinois. She was the oldest of eight children born to the union of Chester and Willie T. Moore- Hurt. She moved to Jackson and united in marriage with Dillard... View Obituary & Service Information

The family of Lela Theola Cox created this Life Tributes page to make it easy to share your memories.

Send flowers to the Theola family.