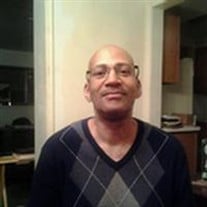 Life’s Reflections Larry Arnold Phillips was born to the union of Napolean and Bertha Phillips on July 8, 1952, in Detroit, Michigan. He was educated in the Detroit Public Schools and graduated from Northwestern High School in 1971 and received his associate’s degree from Henry Ford Community College. Larry Phillips accepted Christ at an early age after attending church with a neighbor. He was called to the ministry at age seventeen while attending the Original Church of God under the leadership of Bishop Donald Jones and served there for several years. Larry Phillips met the love of his life Sheila Vickers and were married, March 4, 1978. To this union two sons were born, Larry and LaJuan. Larry was always aspiring to increase his knowledge in life and his faith. He attended classes in auto mechanics becoming proficient in repairing cars and was always willing to help someone in need. For most of career he worked for Ford Motor Company as a, Glass Technician, Tool and Die Journeyman, Quality Control Inspector, and a 5-Axis Machine Specialist. During his tenure as a journeyman, Henry Ford Community College took notice of Larry and before attaining his degree asked him to join their teaching staff teaching subjects such as drafting, math, and tool and die. He was an awesome man of God and served in multiple capacities locally and across the country. He enjoyed learning about God; he enrolled and completed Bethesda Christian Catechism School. He gave of his talent, time, and tithe, serving several ministries throughout the metropolitan Detroit area. Where he worshipped he was committed, devoted, and dependable. Larry had a full career working for several businesses leaving a definite footprint of his devotion, his friendly personality, and bold faith. He spoke to anyone about Jesus. He was a cleaning sensation, even when dealing with great health challenges you would find him cleaning businesses, banks, churches, and love one’s homes. On Friday evening, December 2, 2016, Larry Phillips made his transition from this earthly life to be with his Heavenly Father. Larry was preceded in death by his parents Bertha and Napolean Phillips, brother; Lamar “Carl” Phillips, sister; Vena Shelton, aunt; Mary Roshelle, and niece; Vanina Batiste. He leaves to cherish his memories his wife; Sheila, sons; Larry and LaJuan, granddaughter; Nova Reine Monette, goddaughters; Nicole Coleman (daughter Sydnee), Jennifer Johnson (sons Josiah and Joshua), Heather Walker, godson; Alfonso Newton II (son Alfonso Newton III), four siblings; Norris Phillips, Jacqueline Phillips-Butts (Ceolice), Garrick Phillips, George Phillips, aunts; Darthene Booker, Ann Kennedy, Ella Mae Hillman and Edna Burson, and a supportive Mother-In-Love; Mildred Vickers as well as a host of other relatives, friends, and loved ones including special caregivers; Antoinette “Nettie” Perry, Lakeland Rehabilitation Center Staff, Karmanos Cancer Center Staff, Dr. Arnkoff, Dr. McLaughlin, and Dr. Coffman and Fox staff.

Life&#8217;s Reflections Larry Arnold Phillips was born to the union of Napolean and Bertha Phillips on July 8, 1952, in Detroit, Michigan. He was educated in the Detroit Public Schools and graduated from Northwestern High School in 1971 and... View Obituary & Service Information

The family of Larry Arnold Phillips created this Life Tributes page to make it easy to share your memories.

Larry Arnold Phillips was born to the union...

Send flowers to the Phillips family.