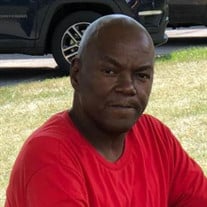 Larry Odell Banks of Jackson, Michigan also known as “LB”, departed this life for his heavenly life on January 1, 2021. He passed away at the age of 57 years old. He was born on October 3, 1963 to the union of his parents Laura Banks and Leonard Caddell. Larry was preceded in his death by both of his parents. Throughout his childhood, he enjoyed hanging out with his family and friends often. He also enjoyed boxing and became a Golden Glove Champion at an amateur fight. Another passion he had was playing chess. Larry leaves behind to cherish his memory two sons; Lawrence Pryor and Sean Taylor both of Jackson, Michigan four sisters; Elois Banks, Angela Banks, Aulanda Banks, all of Jackson, and Debbie Caddell and Leonard Caddell, Jr. of Ypsilanti, Michigan, six grandchildren; Lawrence Pryor, Jr., Ionna Cain, Taquarius Powell, Teanna Pryor, Lennox Oliver, and Harlem Pryor, all of Jackson, Michigan, and a host of nieces, nephews, friends, and cousins, two special friends; Lisa Pryor-Fortner and Claudia Cradis, whom he shared special memories with.

The family of Larry Odell Banks created this Life Tributes page to make it easy to share your memories.

Send flowers to the Banks family.