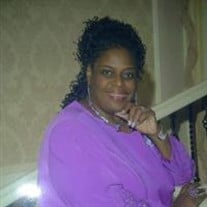 Katherine Yvonne Johnson, was born on November 7, 1952 to the late Thomas James and Lillie Mae Johnson. At age five, Katherine and her family joined the Faithful Church of Christ where she remained a faithful and dedicated serving member until the age of twenty-eight. She faithfully served her church as the church secretary, usher, Sunday School teacher, bus driver, choir member, campus minister, national young people’s vice president for the Pentecostal Assembles of the World and much more. The fifth of fifteen children Katherine determined at the age of ten that she must be successful in life, this is where her journey on the road to success began. Katherine attended secondary school as well as junior college in Boston Massachusetts. As a senior in High school Katherine began her twenty – five year career with New England bell telephone company. At the age of twenty-eight Katherine relocated to Michigan and married Jasper Jones and they gave birth to her pride and joy, Yolanda. While she didn’t desire to have children at the time while pursuing her career she often said her daughter brought the sun out in her life. Katherine plugged right in to her new church home, Soul Deliverance Church, with her husband as a dedicated servant leader; for the next thirteen years she was over the outreach department, missionary chairperson and became licensed as an evangelist. In 1991 she decided to homeschool her daughter while still working fulltime; so the Lord sent her a fellow teacher she met while working at Clinton Street Christian school to do the task. Within a matter of months other families from affiliated churches began to bring their children and before long she had to move. In the lower part of a two family flat home Katherine’s Learning Center was born. The year of 1993 proved to be a very busy year for Katherine, now a member of Word of Faith, she was busting out of the seams in her homeschool. Stepping out on faith after receiving a direct word from the Lord, Katherine’s Learning Center moved into two commercial buildings. At this time she was also blessed with a playground for the children, as well as a new home for her and her daughter. This new journey of faith led Katherine to retire early from her quarter of a century career and follow the mandate of God to save the children. In 1995 Katherine decided to start a daycare center to care for non-school age children and gave it the name of, “Katherine’s Learning Center” changing the name of the now Kindergarten through twelfth grade school, which now occupied four commercial buildings, to “Whittier Christian Academy”. In April of 1997 Katherine was ordained to Reverend and installed as pastor of Whittier Christian Center. She proved to be an entrepreneur extraordinaire starting many businesses throughout the years including Katherine’s Creations where she did floral designs, Whittier Christian Video and more. In 2001, Katherine and her daughter started "Our Caring Hands, Inc", providing care for the intellectually impaired and the developmentally disabled, with nine locations in Wayne and Oakland Counties from 2001 until 2016. In years to come they went on to establish K.Y.A.J’s Party Store, Whittier Christian Conference Center, J.C. Love Community Development Corporation, STARR Training Center and K.Y.J’s Dollar Store and more. While being a successful business owner Katherine earned her Bachelors in Christian Education and Sacred Music, Masters in Christian Education and Christian Counseling and a Doctorate in Ministry, Counseling and Divinity. Katherine leaves to cherish her legacy her only biological daughter; Yolanda Jones, who has learned to share her with her many other sons and daughters. She has three goddaughters; Darla, Lakendra and Kay’Neisha and a joyful part of her life, her god-granchildren; Shan-Toyria, Jailen, Malachi and Omaree’.

Katherine Yvonne Johnson, was born on November 7, 1952 to the late Thomas James and Lillie Mae Johnson. At age five, Katherine and her family joined the Faithful Church of Christ where she remained a faithful and dedicated serving member until... View Obituary & Service Information

The family of Katherine Yvonne Johnson created this Life Tributes page to make it easy to share your memories.