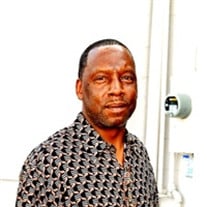 Joseph Phineas Pearson was born April 16, 1959 in Detroit, Michigan to the late JP Pearson and Ethel Lee Pearson nee’ Johnson. He was the third born and only son to this union. Joe, as he was affectionally known, accepted Christ at an early age receiving the baptismal name, Raymond. Joe was educated through the Catholic Private School System where he attended Saint Luke’s Grade School and Ephinany Middle School along with his best friend and brother, Sheldon McPherson. Joe had a strong work ethic. At 15 years old he worked at Ponderosa Steak House for three years as a grill master. This ignited his love for cooking and smoking meats. Have you ever had his barbecue sauce? While working at Ponderosa he also started working a second job at Ennis Shell Station, a black owned business, as a mechanic. This is where he harnessed his love of cars and perfected his skill of re-building race cars, motorcycles and all things of speed. He loved to race and could often be found at the Michigan Speedway, and on the corner of Livernois and Warren racing. Let’s not forget his Kawasaki 900, his 94’ Chevy pick-up and the 82’ fox body Mustang that he worked diligently on for years. He was very athletic he loved to play basketball, baseball, bowling and golfing. There was nothing this man couldn’t do. In 1977, Joe graduated from Bishop Borgess High School. In which, during his time at Bishop Borgess he learned to play the trombone. In the fall of 77’ Joe attended Lawrence Technical Institute where he studied engineering. In 1979, Joe started working for United Technology Inc./InMont Paint/BASF where he retired after 22 years. In 1983, Joe married Carrie “Rochelle” Joe, known by their friends as “Joe and Roe”. To this union one daughter was born, Christin Leeza Pearson. In 1998, Joe was a converter specialist for Comcast until his health started to decline. Joe took pride in his lawn something he learned from his dad JP Pearson; he echoed “Stay off my grass”. If you knew Joe you would know he loved to cook, especially meats, whether it was smoked turkey, grilling ribs, or frying fish or shrimp. Joe loved music, if you passed by his house you would hear the smooth sound of jazz from his Harmon Kardon speakers. If he was driving by you, either the sound of the engine roaring or the music ranging from the Average White Band, Parliament Funkadelic, Kenny G, or his favorite rapper Too Short would make you turn your head to look. Once you saw him pass you, you’d notice the rear window told you “If you can’t hang with the big dogs, stay your a** on the porch”. Joe was a man’s man; he did it all his way, and everything he did was big and loud, his nickname being “The Big Kahuna”.Joe was a patient listener, one that you could turn to for impartial advice. One that you felt understood you, without any extra explanation needed. He was a man of few words, but made his point clear. He not only knew how to be a friend, but most importantly what it meant to be one. Even though he was the only son of JP and Ethel, he had many brothers. There was his cousin Donovan Howard, and his friends since the age of 6; Sheldon McPherson of Canton, Michigan, Kevin Coleman of Washington, D.C, Dennis Coleman of Belleville, Michigan, and Tony Smith of Detroit, Michigan, and Mickey Crowell of Detroit, Michigan. Whenever they got together you could hear them drinking, dancing, and laughing as they recall the memories from their childhood and their antics that continued into their adulthood. Joe was preceded in death by his parents JP Pearson and Ethel Pearson He leaves to cherish his memory a devoted and loving wife; Carrie Pearson, his children; Alvin Smith, Christin Pearson and Brandon Pearson all of Detroit, Michigan, grandchildren; Chloe Smith, and Aaliyah Pearson, his sisters; Anthea Shivers of Greensboro, North Carolina and Juanita Johnson of Phoenix, Arizona. He shared a special bond with his niece; Evel Shivers of Greensboro, North Carolina and nephew Rijon (Samantha) Shivers of Roanoke, Virginia. Joe also helped raise his niece; Yvette Gaston of Roseville, Michigan and nephew; Leonard Joe of Detroit, Michigan. He also leaves his aunts; Mary Langston of Fairfield, California, Mamie Scott of Detroit, Michigan, Veria Page and Shirley Richardson both of Portland, Oregon, and Catherine Pearson of Indianapolis, Indiana, uncles; John Howard of Detroit, Michigan, William Johnson of Portland, Oregon, his father in-laws; Lewis (Martha) Joe of Fort Wayne, Indiana and Oscar (Grace) Speight of Detroit, Michigan, brother in-law; Kirk (Aletha) Joe of Ecorse, Michigan and Timothy Joe of Detroit, Michigan whom assisted him in his time of need during his illness, and a host of cousins, nieces, nephews, family and friends.

Joseph Phineas Pearson was born April 16, 1959 in Detroit, Michigan to the late JP Pearson and Ethel Lee Pearson nee&#8217; Johnson. He was the third born and only son to this union. Joe, as he was affectionally known, accepted Christ at an... View Obituary & Service Information

The family of Josesph Phineas Pearson created this Life Tributes page to make it easy to share your memories.

Send flowers to the Pearson family.