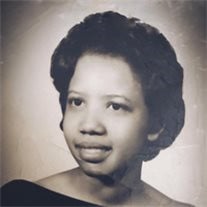 It is said that a great educator, like a candle, consumes itself to light the way for others, and so is the life of Josephine Marie Woods. Josephine was born October 6, 1944 to Henry Joseph Dade, Sr. and Mary Agnes Dade in Daphne, Alabama. She received her early education in the Baldwin County Schools system. The foundation for her lifetime Christian walk was laid while attending her uncle’s church, where she asked Jesus Christ into her heart as her personal Savior. Josephine graduated from Northwestern High School in Detroit, Michigan, home of the Northwestern Colts. After returning to Alabama, she married the love of her life, Alonzo James Woods, Sr. on July 24, 1963. They then decided to settle in Detroit where they raised their family; Venita, Alonzo Jr., Lena, Veronica, and Monica. Josephine continued to light the way in her Christian walk, as she was a faithful member of the Joseph Campau Avenue Church of God, serving over the years as the president of the usher board, Sunday school teacher and vacation bible school teacher. Many times children from the church would spend Sunday afternoons with Josephine and her family at their home until it was time to return to church for evening service. At Church of God of Detroit she was part of the catering, usher board and Sunday school departments. Alongside her husband, they were faithful members of the Deacon and Deaconess Board. Josephine enjoyed attending church banquets and events, and would often, without saying a word, purchase tickets for those that may not otherwise have been able to attend, quietly lighting the way. Josephine and Alonzo later joined their son-in-law and daughter, Reverend Jerome and Lena Willis, assisting them in ministry at the Agape Fellowship Church, where she enjoyed watching the dance and mime ministries, and donating her resources to the children’s church ministry. Concerned with finding suitable daycare for her children, Josephine was led to complete her college education at Wayne County Community College and at Wayne State University. She then began an in-home day care service, which later led to her opening and operating her first day care center. Josephine’s spark for educating children was lit from that point forward, and even after closing her first day care center after she received a kidney transplant, she later opened her second center, because an educator’s flame never really goes out. Josephine’s day care centers were often full to capacity, not because of marketing, but simply from parents spreading the word of how loving and compassionate she was. “Miss Woods” was every student’s grandmother, and she often said her purpose was to ensure that all of her students received quality child care. If a parent had concerns about being able to pay for their child to attend, she would quietly tell them, “We’ll work it out.” Josephine was a stern employer, and every family member was an employee of hers, whether they realized it or not. Josephine touched the lives of countless children through her day care centers, many of whom are now parents themselves. They continued to stay in touch with her, reminiscing about the fond memories they had at her day care center. Josephine was a part of the State of Michigan Childcare Coordinating Council, and she enjoyed leading workshops for new child care providers. She was also a mentor to kidney transplant patients, with whom she shared her transplant experience, and often spoke at transplant events. She never passed up an opportunity to tell others about the challenges that God had brought her through. The educator’s light shines in all spaces. Josephine’s love for her family was unparalleled. She enjoyed hosting family dinners, making sure she prepared everyone’s favorite dish. She never passed up a moment to tell anyone about her children and their careers; a few more moments and she would tell you about her grandchildren and great-grandchildren as well. It’s nearly impossible for Josephine’s life to be defined in the singular, because Alonzo Sr. was by her side through every chapter. He faithfully assisted her in running her day care centers, while working and running his own businesses. He was her husband, business partner, caregiver and more. Whether it was working at home in the kitchen together or serving at church, you rarely saw Josephine without Alonzo. Josephine loved her Lonnie, and he supported her through it all. Her light was too big to carry alone. “Strength and honor are her clothing; and she shall rejoice in time to come. She opened her mouth with wisdom; and in her tongue is the law of kindness. Her children arise up and call her blessed; her husband also, and he praiseth her. Many daughters have done virtuously, but thou excellest them all.” -A Virtuous Woman, Proverbs 31 Whether it was her keen sense for running a business, her meticulous organizational skills, or her coy manner of always getting you to see things her way, Josephine did everything in love and excellence, and in doing so, she was quietly preparing to pass her light. The seeds she planted now grow in her family, friends, students and loved ones. On the evening of April 2, Josephine slipped away quietly to her reward. The light of the great educator, like a candle, forever shines brightly. Josephine was preceded in death by her brother Hendry Dade, Jr., her sisters Joyce Funderberg, Elaine Kidd, and son Alonzo James Woods, Jr. Josephine leaves to cherish her memory: Her loving husband of 56 years, Alonzo J. Woods, Sr.; Venita Johnson (Charles), Lena Olivia Willis (Jerome), Veronica Lynn Watters, Monica Beatrice Thompson (Marvin); 18 grandchildren; 17 great-grandchildren; brothers Tony Dade (Sonya) and Alvan Falls; Sister in law Ossilyn Woods, brother in laws Willie Woods (Marie), Calvin Woods; two godson's Bradford Mallory (Pamela) and Greg Powe (Ebonie), Goddaughter Audrea Lawson; and a host of nieces, nephews, cousins, students, family and friends.

It is said that a great educator, like a candle, consumes itself to light the way for others, and so is the life of Josephine Marie Woods. Josephine was born October 6, 1944 to Henry Joseph Dade, Sr. and Mary Agnes Dade in Daphne, Alabama. She... View Obituary & Service Information

The family of Josephine Marie Woods created this Life Tributes page to make it easy to share your memories.

It is said that a great educator, like a candle, consumes itself...

Send flowers to the Woods family.