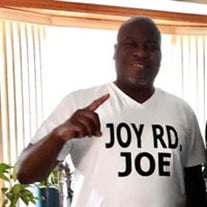 Joseph Maurice Ozier was born on September 16, 1982 to Janese Ozier and William Ratcliff in Minneapolis, Minnesota. He unexpectedly departed this life on March 31, 2020. He was preceded in death by his grandparents; Barbara (Richmond) and Frank Ozier, Jr. and John Ratcliff and his uncle; Craig Ozier, who was very special to him. Joseph, known to most as “Joy Rd. Joe” or “JR”, accepted the Lord and at an early age and continued his belief throughout his life. He attended Detroit Public Schools and was employed at Meritor Inc. Joseph had such a big personality, he never met a stranger! He loved people and instantly made friends wherever he went. Joseph loved entertaining, whether it was having friends over, hosting a party with his “Fam Tiez Ent.” crew, or promoting someone else’s event, his element was right in the middle of it all. One of his favorite things to do was brag about his mom’s cooking and having you come over for dinner so you could see for yourself. Joseph was one of the most genuine, caring individuals you could ever come across. He went above and beyond in all capacities. He thrived on being surrounded by his loved ones and was the life of all the family functions and gatherings, he always kept us laughing with his witty sayings. He had a heart for the elderly and would check up on them, sometimes taking them his Mama Jan’s awesome cooked meals. He had a passion for feeding and giving to the homeless; Joseph had a heart of gold! Joseph leaves to cherish his memory and honor his life his loving parents; Janese and Eddie Askew, two brothers; Jalin Askew and Donte Askew, two sisters; Quanna Butler and Crystal Mays, his partner in life and love; Brittany Tooles and her daughter that he loved as his own, Nayanna-Lee, three aunts; Rhonda Sims (Ned), Roseanne Davis and Penny Pulley, three uncles; Michael Ozier (Thelma), Roger Ozier and Tyrone Richmond (Heidi), and one great aunt; Shirley Brown. He also leaves a special aunt and uncle; Chanel and Nate Brundidge, his dearest godmother; Shronda Joshua, two godsons; Ethan Butler, who is also his nephew and Jacob Marchbank, his special friends/family; Edward Shoemaker, Dave “Vito” Sadler, Maurice Marchbank and Chaquita Willis. Joseph also leaves other family members, a host of cousins that he kept close and made sure he had a relationship with each of them, and so many friends.

Joseph Maurice Ozier was born on September 16, 1982 to Janese Ozier and William Ratcliff in Minneapolis, Minnesota. He unexpectedly departed this life on March 31, 2020. He was preceded in death by his grandparents; Barbara (Richmond) and Frank... View Obituary & Service Information

The family of Joseph Maurice Ozier created this Life Tributes page to make it easy to share your memories.

Send flowers to the Ozier family.