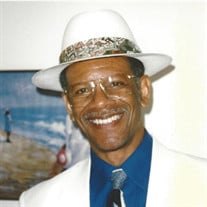 Johnny B Montgomery’s life began in Helena Arkansas in 1938 born to the union of Albert and Aquilla Montgomery. He was the third of 9 children: Velma Rucker, Florine Calhoun (Andrew), Alerone (Annie), Beshara, Debra, and Emmanuel. He was preceded in death by Almeta Robbins and Albert Charles. Johnny attended Detroit Public Schools and graduated from Wilbur Wright High. Although his area of study was automotive repair, he found time to find his first wife Emma Mae Byrd. From this union four children were born Johnny Anthony, Reginald Irwin, Lemuel Reynold and Alicia Doretta. He later joined the United States Air Force where he served as a Mechanical Technician. He was the number one technician in his field. His job was to repair equipment that maintained the aircrafts during times of war. After his dedicated service to the Armed Forces, he began his career with the Detroit Department of Transportation where he served 30 years and received several commendations for excellent service. Johnny received Christ at an early age. He later joined Eastside Church of God sanctified, where he served as a faithful member. Johnny was a member of the Voices of Inspiration choir. He also became Chairman of the Deacon Board. His greatest joy, however, was being Sunday school teacher for the Adult males. He was also a member of the local, district and national brotherhood ministries. Deacon Montgomery loved the Lord and it was manifested in everything he did. Johnny loved reading, studying his Bible, working on cars and teaching. His philosophy was “Learn all can about all you can.” Most of all he enjoyed spending time with his family. Dad continued the “PaPa” tradition of family and friends Sunday fellowship dinners after church. Outside of church he was affectionately known as “Daddy O”, a name given to him by his son GG. The Montgomery men are known for their musical talent, each having his own instrumental skill set. Dad was an avid guitar player. During the brother’s regular jam sessions “Get Down, Get Down,” he was known to run a rip cord up and down the lead guitar offering melodious sounds Dad not only loved to laugh, but he also enjoyed making others laugh. Dad always had a few jokes ready, and he told him as if it was your first time hearing them (Ha Ha) although dad was comical, and full of laughter he showed a serious dedication toward the progress and success of his children by first offering the Word of God and ultimately always displaying unconditional love. After the loss of his first wife Emma, his love intensified as a single parent, and it never wavered. After a decade of Johnny and Jesus alone, dad was blessed with yet another “good thang.” He married Joyce E. Sallad. Dad received her children Leroy and Melisa as his own. “Baby Boy” and “Baby Girl” as they affectionately called each other were married for 25 years. They enjoyed traveling and spending time in the word of God. Ma Joyce enjoyed dressing her husband for church and took pride in taking care of him. This union continued until dad was taken to Glory. Johnny Montgomery loved his family and most of all he loved the Lord. He entered into eternal rest on May 14, 2020. He leaves to cherish his memory his loving wife; Joyce E, four children; Johnny Anthony, Reginald, Lemuel, Aleecia and 2 stepchildren Leroy and Melissa, six siblings; Velma, Florine (Andrew), Alerone (Annie), Beshara, Debra, and Emmanuel, 21 grandchildren two of which preceded him in death Allante

Johnny B Montgomery&#8217;s life began in Helena Arkansas in 1938 born to the union of Albert and Aquilla Montgomery. He was the third of 9 children: Velma Rucker, Florine Calhoun (Andrew), Alerone (Annie), Beshara, Debra, and Emmanuel. He was... View Obituary & Service Information

The family of Johnny B. Montgomery created this Life Tributes page to make it easy to share your memories.

Johnny B Montgomery’s life began in Helena Arkansas in 1938 born...

Send flowers to the Montgomery family.