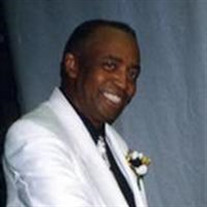 Joe Lewis Moore, was born April 29, 1937 in Hernando, Mississippi the child of the late Bertha "Big Mama" Bryant and the late Walter Moore. Joe was the youngest of three children born; Lorine "Polly" Brownlee (deceased) and Lawrence Moore. As a child "Fish" (a nickname him and big brother Lawrence often called each other) was a quiet and shy boy. At the age of 10, Joe accepted Jesus Christ as his Lord and Savior and united with Mary Missionary Baptist Church. After finishing the 8th grade the Moore boys along with their father Walter packed up their belongings and set out to find a life that allowed for better opportunities which landed them in River Rouge, Michigan. Joe attended and graduated River Rouge High school. After high school he married his first wife, the late Gayle Ann Campbell and within the union three children were conceived; Kimberly "Kim" Moore, Kevin "Mike" Moore and Karon "Nee-Cee" Hammett (Kevin),and later he conceived another child Lucinda "Renee" Byrd. When Joe Moore and Dorothy Sharp first met, there was a connection amongst the two and on October 2,1982 they profess their love for one another and the two were wed. Amongst this union he became a new step-father to Portia Peoples, Barbara Clarke (William), Pernell Peoples and Terry Peoples (deceased). Joe Moore worked as an electrician at Great Lake Steel. Where he met and created tons of relationships, who then became friends that he often laughed and played cards with. After 30 years of working for Great Lake Steel Joe decided to hang up his hard hat and retire in 1998. During his retirement he enjoyed doing a number of things such as; traveling, watching sports, spending time with family, but above all, he enjoyed reading and talking about politics. All and all Joe Lewis Moore was simply just was humble, hard working, and driven man. A go-getter to say the least. He carried himself with pride and dignity and that is something we all can never forget! He leaves to cherish his memory: his wife, 4 children, 15 grandchildren, 6 great-grandchildren, brother and a host of cousins, nieces, nephews and friends.

The family of Joe Lewis Moore created this Life Tributes page to make it easy to share your memories.

Send flowers to the Moore family.