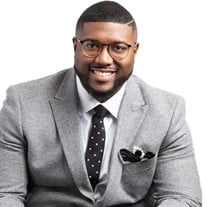 Jason Harold White, Jr. gained his wings to be with the Lord on Monday, August 16, 2021, just 15 days before his 33rd birthday. His wife; Janimary, his mother; Jackie, and his children; Jaslene and Jason III embraced him as he made his transition. Jason was born on August 31, 1988, in Ann Arbor, Michigan to Jacqueline (Jackie) Denise Porter and Jason Harold White Sr. He was preceded in death by his grandmother; Hallie Marie Poole (James) and both of his grandfathers; Ollie Lee Edwards, and McKinley Boston. Jason grew up in Jackson, Michigan as the oldest child with his four siblings; Javon, Janell, Alfred Jr, and Antoine. Jason had an unbreakable bond with his siblings. Not only was he a brother, but he was also a father figure to them. Jason and his siblings went through many obstacles in their lives. Jason led by example not focusing on what was wrong but accepting and conquering every challenge he faced. He used those obstacles to build his testimony; Jason taught his siblings and others that there is no excuse to not be successful in living life and honored his word. All dreams and goals do come true if you trust in God, have faith, and put in the leg work. He had no regrets or shame to his life experiences as they helped to mold him into the wonderful man, amazing husband, and incredible father he had become that we all knew and loved. Jason accepted the Lord as his savior at a young age at Lily Missionary Baptist Church under the leadership of Pastor James L. Hines. His grandmother Jennie Lee Johnson helped with the care of Jason and his siblings. Jason’s grandmother set the path for them to learn about the Lord. Jason met and fell in love with Janimary when he first laid eyes on her in elementary school. He knew immediately she would be his wife one day. They became high school sweethearts that led them to marriage. They were married on October 26, 2011, at Lily Missionary Baptist Church. From this union, two beautiful children were born; Jaslene Marie White and Jason Harold White III. Jani and their children were the daily motivation that Jason needed as he built his empire. Jason prided himself on being a husband and father to his family. Jani was his backbone; they were a team. She became his motivation to strive for greatness and impacted lives by sharing his experiences and being an example. He enjoyed having conversations with his children, exploring their minds, and challenging them on many things. Jason graduated from Jackson High School in May of 2007. He went on to play football as a linebacker for Adrian College while earning his bachelor’s degree in Business and Marketing. Jason always had passion for knowledge and sharing his ideas through his creative talents. He knew how it felt to struggle and go without, and while he never complained, he set out to teach others about financial literacy. He was so determined to share his wisdom and make an impact on other people’s lives. With God at the head of his life, he stepped out on faith and created Witness Riches. From this, grew an umbrella of services such as: Dough Chaser, The 700 Club, Transcend Financially, Black Lettuce and New Direction. Jason leaves to cherish his memories, his devoted and beautiful wife; Janimary White, two loving children; Jaslene Marie White and Jason Harold White III, his parents; Jacqueline Denise Porter (Eddie) and Jason Harold White, Sr., grandmother; Jennie Lee Johnson, five siblings; Ashley Benjamin (Derrick), Javon White (Victoria), Janell White, Alfred Hall III, and Antoine Hall, his wonderful family of in laws; Jenny Vidro (mother in law) and Gabriel Perez (father in law), Alejandro Santiago (brother in law), and Carla Santiago ( sister in law), four nieces and five nephews, thirteen step sisters and brothers, a special aunt; Josephine Oliver, his best friend; Troy Johnson, a special teacher; Linda Larry-Robinson and a host of aunts, uncles, cousins, friends, and influences. Jason’s legacy lives through each and every one of us. The thing that Jason wants us to take from this is being passionate about what you are trying to accomplish in life and always rise above any obstacles.

Jason Harold White, Jr. gained his wings to be with the Lord on Monday, August 16, 2021, just 15 days before his 33rd birthday. His wife; Janimary, his mother; Jackie, and his children; Jaslene and Jason III embraced him as he made his transition.... View Obituary & Service Information

The family of Jason White created this Life Tributes page to make it easy to share your memories.

Jason Harold White, Jr. gained his wings to be with the
Lord...