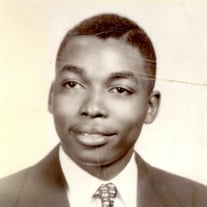 James F. Williams was born to Charlie and Ora D. (Suggs) Williams in Attila County, Kosciusko, Mississippi on June 30, 1932. He was preceded in death by his parents, and siblings; Charles Williams, Christine Perrin, Oscar Williams, Lula Mae Sims, and Callie Mae Roundtree. At an early age, James was saved by faith at the John Bunker Hill Missionary Baptist Church in Bunker Hill, Mississippi. He brought his membership letter to Second Baptist Church in Jackson, Michigan and joined under Reverend Mark Carrington. He served as an usher, sang in the choir, and served on the Trustee Board. In 1987, he became a member at Lilly Missionary Baptist Church in Jackson. There he served as an usher and worked on the Trustee Board for building projects at the old church. James moved from Mississippi to Jackson, Michigan in 1947 at the age of 14 to live with his sister Cathryn. He graduated from Jackson High School and later attended Jackson Community College where he studied industrial arts, tool and die. In 1959, James married Mackielean McCann and to this 10-year union three sons were born. James was employed for 30 years at Clark Equipment Company in Jackson specializing in transmission assembly and machine operation. He also worked over 10 years at the Michigan Department of Corrections Parole Camp as a maintenance supervisor specializing in building pole barns and similar structures utilizing inmate labor. James was also employed at: Michigan Department of Natural Resources, City of Jackson, and Kelsey Hayes Wheel Company. In addition, he volunteered for the City of Jackson Police Reserves for 15 years. He obtained professional licenses in both carpentry and motor vehicle mechanics (transmissions and axles). James used his carpentry skills to build three houses: 175 W. Addison Street in Jackson, Michigan, 405 Lakeshore Drive in Grass Lake, Michigan, and a house built for his mother located in Sallis, Mississippi. In addition, he built a commercial ice cream store located at 313 Page Avenue in Jackson, Michigan where James proudly owned and operated the Little Royal Dairy ice cream store for over 8 years during the 1970’s. James enjoyed fishing, hunting, boating, golf and traveling the globe. James loved to share stories of adventurous trips to Japan, Singapore, Taiwan, Hong Kong, Canada, Hawaii, Alaska, California and more. He used his travel experiences to meet people and gain a better understanding of how people all around the world live, love and worship. He encouraged everyone to experience traveling abroad at least once in their lifetime. Left to cherish his memory are his sons; Garry Williams of Southfield, Michigan, James Allen Williams of East Lansing, Michigan, Mark Williams of Southfield, Michigan and grandson Austin Williams of Midland, Michigan. He is survived by siblings; Cathryn Williams of California, Thomas (Nancy) Williams of Jackson, Michigan, Sammie “Sugarman” Williams of Jackson, Michigan, Lois (Julius) Nobles of Georgia and Mary Helen (William) Bentley of Detroit, Michigan. He was also loved by his many nieces and nephews.

The family of James Williams created this Life Tributes page to make it easy to share your memories.

Send flowers to the Williams family.