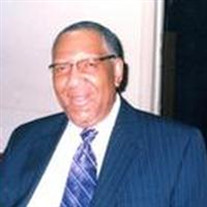 James Edward West Sr., a talented singer, gifted cook, devoted father, brother, and faithful friend passed away on Thursday March 31, 2016. He enjoyed many things in his life; if you knew him then you knew his very favorite thing was shopping and finding bargains specifically for food and clothes. He was a lifelong educator and student, evidenced by the time he spent studying and teaching the word of God. James better known as “Sonny” was a giver; many would say if he had a dime, you had a nickel. He was known for saying “no” but always meaning “yes”. In his limited spare time you could find him watching judge shows on television, enjoying his home and spending time with his children, grandchildren, family and friends. Named James Edward West at his birth on June 20, 1942 in Nashville Tennessee, he was raised by Jefferson Garfield and James Ella West; the third eldest of their four children. He was educated in the Nashville Public School system and obtained a Bachelor’s Degree in Education from Tennessee State University. After migrating to his adopted home with the Gray family in Detroit Michigan, James began his work in education as a Business Education and Typing Teacher with the Detroit Public School system at Butzel Jr. High School. He continued his own education earning a Master’s Degree in Education from Wayne State University. James taught at Hampton Jr. High School and Western High School Adult Education until his retirement after 36 years in June 2000. James was united in marriage to Frances Johnson on December 28, 1966; their union was blessed with two children James Edward Jr. and Jacquelyn Elise. James and Frances were married for twenty-four years. At the early age of twelve James accepted Christ’s plan of salvation under Elder R. E. Williams at Meharry Boulevard Church of God. After moving to Detroit Michigan to begin his career in Education, James joined the Northwest Church of God and has served faithfully under the late Elder Samuel Randall, late Bishop Connie L. Keene Jr. and presently Elder Clayton L. Keene. He gave of his time in service to Northwest for over fifty years. James served God and the church in many capacities; Choir Member and Soloist known for his beautiful tenor voice, Assistant Church Treasurer, Assistant Sunday School Superintendent and Sunday School Teacher. James spear headed many programs in the church specifically the effort to purchase the baby grand piano as well as the National Tabernacle. He gave his time to missionary work often sitting with the sick or the grieving for support. He was well known for his delicious brownies, greens, broccoli casserole, and hot water corn bread and was considered a helper in every capacity. James was preceded in death by his sisters Greta Mae West, Ann Lavonia West-Armstrong, and sister-in-law Rosetta C. West. He leaves to cherish his memory his brother Jefferson Garfield “Gus” West III, his son James Edward West Jr.; daughter Jacquelyn Elise West; four grandchildren Veliza, Josiah, Maya and Keturah; a host of other relatives and friends.

James Edward West Sr., a talented singer, gifted cook, devoted father, brother, and faithful friend passed away on Thursday March 31, 2016. He enjoyed many things in his life; if you knew him then you knew his very favorite thing was shopping... View Obituary & Service Information

The family of James Edward West, Sr. created this Life Tributes page to make it easy to share your memories.

Send flowers to the West, family.