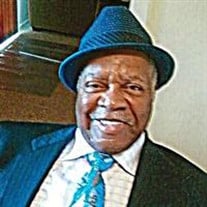 A Great Man, Named James Lang   James Lang was born August 20, 1937 in Detroit, Michigan (neighborhood entitled: Black Bottom).  James’ brothers and sisters preceded him in death including his parents Reverend Edward Lang and Mary Lou Stillwell, leaving one special matriarch sister, an angel who is 108 years of age, Mamie Kirkland, Buffalo, New York.  James was an ambitious man who graduated from Miller High School but he did not stop there, he attended several trade schools, Russell Builder School, and Stationary Engineers Local 547 and several more, there he achieved and received his contractor licenses just to name a few: Journeyman’s card, State of Michigan license, Residential Builders, Michigan Department of Labor, License Class B Boiler Installer, HIVAC, UNLIM TGG REF/AC. He never stopped learning and working as an admirable overachiever.  He believed in the old saying, “the early bird gets the worm,” and he would arrive at work an hour early and to family gatherings an hour early also and he would be startled if everything was not in order. James work ethics is to be commemorated.  In his younger years, he was a hustler, parking cars, doing landscape and he was Mr. Fix-it, however he was a professional who retired from Pipefitters Local 636, 20 plus years, he also worked at Michigan Consolidated Gas Company, and The Detroit Board of Education.  In the 1980’s he took all his work experience and started his own business Lang’s Mechanical Heating Contractors.   Working and managing his business, Jim still wanted to do more for others and he decided to protect his city of Detroit, supporting Mayor Coleman Young and he joined the Detroit Police Reserves and never thought twice about putting his life on the line.  He was honored to wear his police uniform and badge #927 and if you got out of line he had no problem taking you down. His Christian journey started at a young age because his father was a preacher. James was a praying man, putting God at the forefront of his life.  The family denomination is Baptist but when he moved his family on Strathmoor,  Gracious Saviour Lutheran Church was convenient for his family to attend and he found the worship and church members to be remarkable.  God wanted James and his precious son, named after him whom they nicknamed Jimmy to have a have a sweet companion to make their life complete, he placed in his path Drunell June Hudson. James asked  Drunell for her hand in marriage.  James father role increased because Drunell had 3 loving children, Nathaniel (Nate), Zilphia and Seabronetta (CB).  In this union of marriage James and Drunell gave birth to Chantal (Channie) and Michelle.   James was a good father that loved his 6 children even though they ate a lot, providing groceries for his family just meant he had to shop at Farmer Jack, A & P and the Eastern Market often.  Jim and June were married for 34 years, raising their kids and taking camping trips to Wheatley, Ontario, at the camp grounds Holiday Habour Resort off of Lake Erie.  In James next chapter of life, he met Norma Mailey and they were united in holy matrimony in 2008. James called Norma (Honey) and Norma called James (Honey Bunny).  They both loved to surprise each other with gifts and they traveled.    James had a new blended family consisted of Norma and sons, the twins, Aaron and Anthony and her niece  Kim.  James drove Norma to work and soon met all her coworkers and he became popular at Providence Hospital, Southfield.  What did Jim like to do in spare time? In the late 80’s – 90’s he was an active Brother of Prince Hall Lodge 24, but since that time he really enjoyed sitting in his lazy boy chair watching sports, mostly football, taking a siesta on his patio, shopping, playing the lottery, listening to jazz music and most of all cooking.  However, Jim was the chef that could make BBQ that melted in your mouth. He jokingly would say, “leave $10,” for the plate but he was a big teaser, he did not want your money he just enjoyed hearing the praises for his cooking and southern hospitality.  We want to give a special acknowledgement to the ICU nurses at Providence Park Hospital, Novi for the extraordinary care that James received in a loving and caring manor as well as the support that was given to the family during this challenging time. James leaves to cherish his memories, his devoted, loving, Christian wife of 8 years, Norma O’Lonia Lang, his children, Zilphia Martin, Seabronetta Barr, James Magnum, Santa Barbara, California, Chantal (Darryl) Graham, Michelle (Darryl) Hankinson. One sister Mamie Kirkland, Buffalo, NY Eight grandchildren, 4 great-grandchildren, a host of nieces, nephews, relatives and friends.

The family of James Lang created this Life Tributes page to make it easy to share your memories.

Send flowers to the Lang family.