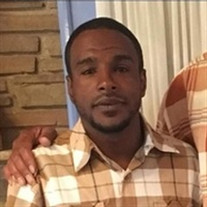 James Carl Crenshaw III James Carl Crenshaw, III graced this world on July 31, 1984 in Detroit, Michigan to the late James Carl Crenshaw, Jr. and Dianne Lippett. He was preceded in death by his brother, Marvin Lippett.  He confessed his life to Christ at an early age.  He was educated in Detroit Public Schools.   He worked various jobs throughout his life.  Jabo as he was affectionately known, always had a smile on his face. He was silly and always had a wild story to tell you.  He loved music and was one of the best DJ’s ever, he kept the crowd moving.  Although he never had kids of his own, he loved to play with children and make their day fun, he always looked out for them making sure that they were alright.  He’d take care of them like they were his own. Jabo was an independent young man who paved his own way through life, he didn’t burden people, he always managed to take care of himself. Nobody was a stranger to Jabo, he claimed everybody and everyone that he crossed was his cousin, his uncle or his bro.  Jabo was robbed from us much too soon, I wondered who would keep Jabo in order after Marvin left us, but I have to believe that GOD had a better plan for him and wanted him to go with his brother.  Jabo, who was a kind, sweet, innocent sole is gone from this earth but not our hearts.  As Jabo would sometimes tell you when he saw you after not seeing you for while that he missed you like cheesecake; we will miss him even more. James made his transition from labor to reward on July 30, 2018. In his passing he leaves to cherish his memory, six siblings: Aaron Lippett, Marvella Butler (Fred), Leon Lippett, Lona Crenshaw, Neda Dillard and Jasmine Crenshaw, four step siblings: Anthony, Chris, Amber and Michael Brace, two aunt’s: Doretha Lippett and Gina Austin, one uncle: Darryl Perryman, and host of other nieces, nephews, cousins and friends.

The family of James Carl Crenshaw, III created this Life Tributes page to make it easy to share your memories.

Send flowers to the Crenshaw, family.