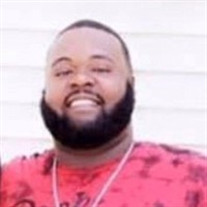 James Henry Cooper-Robertson was born the only child to Katrina Cooper and the late James Walter Robertson on November 28, 1994.  James, with a personality, smile and stature larger than life, met his journey’s end on Friday, March 6, 2020 at the age of twenty-five. The spirit of leadership and his wonderful sense of humor were imparted to James by his grandfather the late Pastor James W. Cooper.   From his grandmother, the late Nellie Mae Cooper, he was given the gift of care, concern and respect for aged people as he labored with his mother in caring for her until her transition.   Last, but certainly not least was the capacity to serve and the love for his family which was bestowed upon him from his mother Katrina Cooper-Oliver, watching and assisting her in serving her parents, family and the ministry, particularly at First Evangelist Ministries.  Unique to James was the passion he exhibited in everything that he participated in and his love for his family and his mother. He approached life with a “go big or go home” persona. He was the big brother to his cousins, encouraging and correcting them infamously known for his affectionate displays of compassion with his big bear hugs.  As a family, we stand united in expressing “gone too soon”, “enough is enough” and “never forgotten!”  We declare that the weapons of our warfare are not carnal, but mighty through God to the pulling down of strongholds. He is proceeded in death by his father, James W. Robertson, grandparents, Pastor and Mother James and Nellie Cooper, his brother Jaquan Robertson-Johnson, his aunts Carole Renee Cooper, Felicia A. Cooper and Linda Miles. Left to cherish her memory are: his mother Katrina Cooper-Oliver (Earl) of Jackson, MI, his sister, Ashley Johnson of Flint, MI, his brother, Anthony Shield (Samia) of Flint, MI, his uncles, Gregory (Carmen) Cooper of Flint, MI, James (Lisa) Cooper of South Haven, MI, Morris Cooper of Rocky Mount, NC, and Bishop Roger Jones, Flint, MI.  His aunt, Willye Dawkins-Baker (Marvin) of Newport News, VA.  His cousins Briyana Cooper, Deon Cooper, Dorian Cooper, Greg Cooper, Jalen Cooper, James T. J. Cooper, Jasymin Cooper, Johnny Roberts and Roshan Green.  His nieces and nephews Samya Johnson, Gana Hatcher, Anylah Pecon and Jaquan Robertson-Johnson Jr.  Special Acknowledgment to his cousins, Elder Roderick, Elder Roger and Rory Jones, Derrick and Keith Evans along with his brothers Tre Williams, Fred Shaffer and Wesley Edwards and his buddy and boss, Mike McElory and the entire Highland Assisted Living staff along with so many other countless special family and friends.

James Henry Cooper-Robertson was born the only child to Katrina Cooper and the late James Walter Robertson on November 28, 1994.  James, with a personality, smile and stature larger than life, met his journey&#8217;s end on Friday, March 6,... View Obituary & Service Information

The family of James Henry Cooper-Robertson created this Life Tributes page to make it easy to share your memories.

James Henry Cooper-Robertson was born the only child to Katrina...

Send flowers to the Cooper-Robertson family.