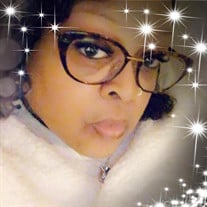 On November 2, 2020, surrounded by her loving family, Jacqueline “Jackie” Marie Sanders gained her wings and went home to be with the Lord. She was the oldest child of Guy and Yvonne Thompson. Jackie was preceded in death by her parents; Guy and Yvonne Thompson, her brother; Guy Thompson, Jr., her mother-in-love; Lorine Sanders, and her sister-in-love; Carolyn Lindsay. Jackie was born a native in Jackson, Michigan and she attended Parkside High School. Jackie worked as a Customer Service Representative for 21 years at Staff Pro. They considered her as a very loyal employee. Jackie married the love of her life, Hollis “Maine” Sanders on October 8, 1980. Three children were born to this union. The love they shared began as teenagers and was rich beyond words. Their love was a true testimony to those around them. To know Jackie is to know the love that she held for her husband, children, grandchildren, great-grandchild, her sister, and her family. Jackie began singing as a child and had a voice of an angel. Her anointed melodic voice had you feeling the presence of God. One of her favorite song was, “Every time I turn around, I get a blessing”. Her love for God and for music led her to be on the praise team at Canaan Land Temple (under the leadership of her late uncle, Pastor Eugene Parker) and later at Faith Temple Word of Faith Ministries (under the leadership of Apostle John Walker). Jackie leaves to cherish her memories, her husband; Hollis M. Sanders of 43 years, her son; Hollis Jermaine Sanders, her daughters; Latisha N. Sanders and Tamikia M. Sanders, her sister; Cecelia M. Thompson, her brother; John Smith, her eleven grandchildren, one great grandson, four sisters-in-love; Nora (JC) Oliver, Faye Spicer, Joyce Johnson, Brenda (Ron) White, her aunts; Theresa L. Parker, and Jacquelyn S. Harrell, her uncle; Lloyd (Jean) Parker, her God-sisters; Ondria (Theodore) Fowler-Boyd, Ondreana Campbell, and her godchildren; Rachelle L. White, Jameshia Suddeth, and Caleb Moss. She also leaves a host of nieces, nephews, and cousins whom she loved dearly but she shared a special bond with her little cousins; Derice Warnsley, Morgan Warnsley and Nariya Parker.

On November 2, 2020, surrounded by her loving family, Jacqueline &#8220;Jackie&#8221; Marie Sanders gained her wings and went home to be with the Lord. She was the oldest child of Guy and Yvonne Thompson. Jackie was preceded in death by her... View Obituary & Service Information

The family of Jacqueline Marie Sanders created this Life Tributes page to make it easy to share your memories.

On November 2, 2020, surrounded by her loving family, Jacqueline...

Send flowers to the Sanders family.