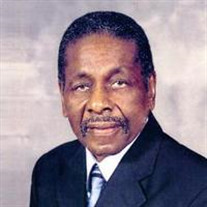 JP Pearson was born December 10, 1930 in Greenville, Mississippi. He was the ninth child born to the union of the late Mary and Ellis Pearson. JP attended Arkansas public schools and left at the age of 17 he moved to Denver, Colorado with his older brother, in order to find work in the coal mines. A couple of years later JP moved to Detroit, Michigan to join his sister Susie. While in Detroit, JP met the love of his life, Ethel Johnson. JP and Ethel wed October 27, 1952 and JP was drafted into the Army December 8, 1952. While in the Army, JP served in the Korean War and returned from service October 15, 1954 and was honored with the Korean Service ribbon, the United Nations Service medal and the National Defense Service medal. An electrician by trade, he left his employment with Ford Motor Company at the age of forty and started his own business. Until his family forced him into retirement, JP was well sought after for his exceptional work. JP was independent, loved his family, baseball, westerns, loved to travel and was an avid dominoes player. He loved listening to gospel music, a couple of his favorites being the Flint Cavaliers, Jackson Southernaires, and Shirley Caesar. JP had a wonderful sense of humor, was dependable and always had an open ear. He was very particular about how he kept his home and lawn. He was well known in the neighborhood by his constant telling for people to, "Get off his grass". If there were two things you could say about JP, it would be that his door was always open, and he was never too busy for a game of dominoes. He will be greatly missed. JP was as preceded in death by his parents the Rev. Ellis Pearson, Sr. and Mary Pearson, his wife; Ethel Lee Pearson and brothers; Claude, JD, Shorty, Franklin, Ellis, Jr., and Mario, Sr., and sisters; Gladys, Ellen, Vessie, Beatrice, and Susan. He leave to cherish his memories his children; Anthea Shivers of Greensboro, North Carolina, Juanita Johnson of Phoenix, Arizona, and Joseph (Rochelle) Pearson of Detroit, Michigan, grandchildren; Evel Shivers of Greensboro, North Carolina, Alvin Smith of Detroit, Michigan, Rijon (Samantha) Shivers of Roanoke, Virginia, Christin Pearson of Detroit, Michigan, and Brandon Pearson of Detroit, Michigan, great-grandchildren; Zairia Drumgoole, Chloe Smith, Aaliyah Pearson, Alana and Javon Shivers, three sisters; Mary Langston of Fairfield, California, Olevia Taylor of Detroit, Michigan and Mamie Scott of Detroit, Michigan, sister-in-laws; Veria Page of Portland, Oregon, Shirley Richardson of Portland, Oregon,  Catherine Pearson of Owensboro, Kentucky, and a host of nieces, nephews, family and friends.

JP Pearson was born December 10, 1930 in Greenville, Mississippi. He was the ninth child born to the union of the late Mary and Ellis Pearson. JP attended Arkansas public schools and left at the age of 17 he moved to Denver, Colorado with his... View Obituary & Service Information

The family of JP Pearson created this Life Tributes page to make it easy to share your memories.

Send flowers to the Pearson family.