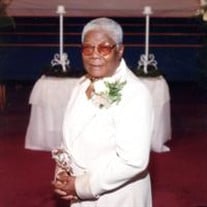 Illa Katherine Hatter Moore, lovingly known as “Mike and Aunt Mike”, was born on January 15, 1926 in East St. Louis, Illinois the second of five children to the union of Pound and Mittie Hatter. Her parents and three of her siblings have preceded her in death. Illa received her education within the East St. Louis, Illinois public school system, attending the prestigious Lincoln Senior High School and was a member of the renowned marching band as a majorette. After the completion of high school, she attended Scotia’s School of Beauty Culture, passed the Illinois State licensing board and began working as a cosmetologist in the Ora Bennett Beauty Shoppe. She became a well sought after hair dresser whose clientele included Ike Turner of the Ike and Tina Turner Revue and many in the entertainment sector from greater St. Louis and the East St. Louis area. She also worked for the government at various locations in St. Louis, Missouri, Chicago, Illinois and Ft. Benjamin Harrison, Indiana. During her childhood and young adult years she grew up attending Market Street Church of God, East. St. Louis, Illinois under the pastorate of Rev. W.W Naylor and received the Lord as her personal savior and the baptism of the Holy Spirit at age twelve. On October 25, 1946 at the age of eighteen she married the love of her life, William Henry Moore and to this union five children were born. In 1963, Illa along with her husband and family relocated to Detroit, Michigan from the greater St. Louis, Missouri area where she and her family became members of the Joseph Campau Avenue Church of God family under the pastorate of Rev. Raymond S. Jackson. She faithfully served on the kitchen committee, the quilting circle, secretary of the Sunday School and church announcement orator. In 1978, Illa and her family began attending Church of God Gospel Mission currently known as Agape Fellowship. Under the pastorate of Pastor Jerome Willis, she accepted the role as church mother and was asked and gladly accepted to weekly introduce and keep alive the Church of God tradition of singing hymns. Illa was employed many years with the Detroit Public School system and retired in 1988. She was an avid sports enthusiast, and the sport of football and the Kansas City Chiefs’ football team were her favorite. As her children began to grow up, she would form baseball and volleyball teams with the neighborhood children. Fast pitch softball was a daily neighborhood game in the summer. The Moore house was the house that kids came to to learn team sports from her. She could be found jumping hop scotch, showing the girls how to play with ball and jax, to teaching them howto jump double dutch jump rope and showing the young men how to win at marbles. She was known as Aunt Mike to many and Gammy and Gam not only to her grandchildren but also their friends. Overall she loved children, not just her own, but children from the neighborhood and the church. For many years she was instrumental in insuring that yearly, the youth of Joseph Campau attended the National Youth Convention where she was head chaperone. She loved gardening, sewing and cooking. Her macaroni and cheese and peach cobbler were always requested for church activities. Her sewing and cosmetology skills were impeccable and many sought and obtained her services. Of all of her accomplishments, her greatest accolade was her daily walk with the Lord. Her morning devotionals were daily and she could be found reading her bible throughout the day. She raised her children and grandchildren on the word of God and always began her teachings with the words, “but the bible says”. Preceding her in death, her husband William Henry Moore and son-in law, James Beamer, Illa leaves to cherish her memory, five children: Crystal Moore, Stephanie Moore, Corliss Beamer, Kelley Granger and William Haywood Moore. Seven grandchildren, Lance Fisher, Tristan Fisher, Brandi Neal, Kariss Beamer, Corbin Beamer, Stefan Scott and Nicholas Granger. Son-in-law Nathanial Granger, two sisters, Treasure Epps and Sally Hatter, special god daughters Dr. Kenya Ayers and Catherine Russell and a host of loving nieces, nephews, relatives and friends.

Illa Katherine Hatter Moore, lovingly known as &#8220;Mike and Aunt Mike&#8221;, was born on January 15, 1926 in East St. Louis, Illinois the second of five children to the union of Pound and Mittie Hatter. Her parents and three of her siblings... View Obituary & Service Information

The family of Illa Katherine Moore created this Life Tributes page to make it easy to share your memories.

Send flowers to the Moore family.