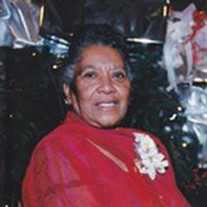 Beloved mother, grandmother, great-grandmother, and sister passed away at home on November 12, 2015 under the loving care of her children and Arcadia Home Health Care. Hildred was born in LaBelle, Missouri on December 15, 1926 to the union of Henry Boyd and Mary B Howard. Hildred was the eldest of nine siblings. The family moved to Palmyra, Missouri when Hildred was very young; where the family joined the Park Chapel Baptist Church where Hildred accepted Christ. Hildred graduated with high marks from Douglas School, class of 1946, she held many jobs as a young lady working for many years at Levering Hospital in Hannibal, Missouri. In 1959, she moved to Jackson, Michigan where she married her long time love and classmate Cecil L. Banks. There were seven children to this union. Hildred was a very hard worker, working for the City of Jackson as a precinct captain at the voting polls, Jackson public schools as a cooking teacher and also taught with the Head Start program where she was one of the founding faculty members, she worked various other jobs, her main work was with Mercy and Foote Hospital which is now known as Allegiance Health. She retired from Allegiance Health after 25 years of service, but continued to work as a volunteer for many years after retirement. Through her work with these companies she was able to impact and touch many lives. Hildred was involved in many groups and organizations; she worked tirelessly with the NAACP, A. Philip Randolph, Peace Council of Jackson, and The League of Women Voters. Through hard work with these groups she was able to register many citizens to vote. She also volunteered her time with the Literacy Council of Jackson, where she was instrumental in helping many people learn to read. Hildred worked out of her soul’s salvation; visiting many sick and shut in all across the city. She was an eager volunteer, helping many churches with special events. Hildred was known for her delicious cooking. Everyone loved her peach cobbler and homemade rolls that just melted in your mouth. Hildred loved people and loved to be of service to those in need. She loved her church and church family at Summit Seventh Day Adventist Church. She studied her Bible and devotions daily. Hildred was known for her great sense of humor; she loved to laugh and joke. But, when it was time to part ways anyone who knew her also knew her favorite parting words... “May the Lord watch between me and thee, while we are absent one from the other. Amen." She leaves to cherish her memory daughters; Sharon Jackson, and Orlean McPike both of Grand Rapids, Michigan, Robin Beavers, and Edna ("Chuck") Wallace of Jackson, Michigan, sons; Charles Williams, and Henry Banks of Jackson, Michigan, sister; Laura Burbridge of Quincy, Illinois, twenty grandchildren, twenty great-grandchildren and a host of nieces, nephews and friends, also special friends; Charlotte Muldrew, Eva Armstrong, and Dorothy Surratt. She was preceded in death by her parents; Henry Boyd and Mary B. Howard, her husband; Cecil Banks, her daughter; Valerie Sue Long, siblings; Charles Howard, Boyd Howard, Oland Howard, Opal Battle, Virginia Collier, Marilyn Frazier, and Arletha Howard.

Beloved mother, grandmother, great-grandmother, and sister passed away at home on November 12, 2015 under the loving care of her children and Arcadia Home Health Care. Hildred was born in LaBelle, Missouri on December 15, 1926 to the union... View Obituary & Service Information

The family of Hildred Kathleen Banks created this Life Tributes page to make it easy to share your memories.

Send flowers to the Banks family.