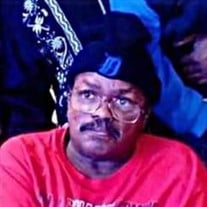 Celebrating the Life of Henry Rollins Henry Rollins was known to all of us as Billy. Billy was born March 23, 1953 to Henry Johnson and Lula Brown. He was the oldest son of seven. Three year old Billy with his parents moved to Detroit, Michigan. Billy attended the Detroit Public Schools where he graduated with honors (3.0). Billy was very intelligent and well spoken. After graduation, Billy attended Wayne County Community College where he earned a degree in Culinary Arts. Billy pursued many avenues; he was a boy scout, a member of the black panthers and earned a black belt in karate. In the seventies Billy joined the Nation of Islam and his name was changed to mere BarakaBilly. Billy was that trophy type of a Big Brother. He was a leader that leaves it to Billy that I'm going to tell my Big Brother. We didn't say I'm going to tell my mama. We said, I'm going to tell Billy!! Yes, he was a “Don’t Mess With Billy Type of Guy”. Billy had a host of jobs his last position (and for many years) was as care giver in a men's facility. He loved teaching and cooking. Billy made his transition at Detroit Receiving Hospital. Billy was preceded in death by his mother; Lula, his father; Henry, and his oldest sister; Sheila. Billy will truly be missed and it saddens our hearts to say goodbye. He leaves to love and cherish his memory, his wife; Audrey, two sons; Malik and Tyree, one daughter; Jamelia Rollins, two daughter-in-law’s, seven grandchildren; Blake, Rayquan, Malik Jr., Leah, Tyree Jr. Tyrese, Kyrie, Jamir, and Aaliyah, two sisters; Joyce and Gail (known as cookie), three brothers; William, Edward and Patrick, and a host of nieces, nephews, and friends. People of Paradise they are the winners Holy Quran 59:20 Allah said, I have prepared for my righteous slaves such excellent things as no one has ever seem nor ear has ever heard nor a human heart can ever think of indeed the righteous will be in pleasure and indeed the wicked will be in Hell fire! Holy Quran

Celebrating the Life of Henry Rollins Henry Rollins was known to all of us as Billy. Billy was born March 23, 1953 to Henry Johnson and Lula Brown. He was the oldest son of seven. Three year old Billy with his parents moved to Detroit,... View Obituary & Service Information

The family of Henry Rollins created this Life Tributes page to make it easy to share your memories.

Send flowers to the Rollins family.