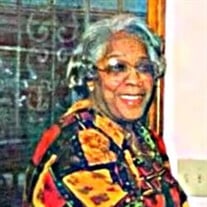 Helen Clarise White born January 11th, 1925 to the late Lucy and Willie McCladdie in Augusta, Georgia went home to be with the Lord on December 17th, 2020 at Henry Ford Allegiance Hospital. Helen AKA Mother White came to Jackson in 1967 after uniting in marriage to the late Rev Excell White. Helen found Christ at an early age and found her church home right away in her move and joined Second Missionary Baptist Church. There she was an active member and served as past President of the Willie Wilson Missionary Board and The Usher Board Circle #1, as well as being on the kitchen staff for many years. Helen’s ultimate hobby was bowling in which she did for years on various Leagues. Being active in the community she was also a member of the Jolly Dozens Social Club and the Southeast Jackson Association of Minister’s Wives and Widows/Michigan State Minister’s Wives and Widows. But, Helen had a real passion for and loved cooking and if you were real lucky, she may have given you a recipe. Helen was preceded in death by her parents Lucy and Willie McCladdie, two brothers Willie and Frank McCladdie one sister Margaret Brandham, her granddaughter Teresa Rose Pearson and great-grandson Stephen Boyd Jr. and her loving husband Rev Excell White. She leaves to cherish her memories her children David Milliken (Evantha), Jacqueline Saafir, Roosevelt Pearson aka Pat White, Margaret Hobbs (her great caregiver), Grandchildren David G Milliken, Carla Sweatt, Quincy Sweatt Jr, (Minnette), Vernae Boyd (Stephen), Darren Milliken (Michelle), Latrina Sweatt, Ricarlo Scott, Shulawn Doxie (William) ,Dwayne Milliken (Leslie), Damon Sanders and Kiara Hobbs, 8 Great Grandchildren, and 9 Great-Great Grandchildren. In lieu of flowers donations can be made to the Southeast Jackson Association of Ministers Wives and Widows Scholarship Fund in memory of Helen C White.

Helen Clarise White born January 11th, 1925 to the late Lucy and Willie McCladdie in Augusta, Georgia went home to be with the Lord on December 17th, 2020 at Henry Ford Allegiance Hospital. Helen AKA Mother White came to Jackson in 1967 after... View Obituary & Service Information

The family of Helen Clarise White created this Life Tributes page to make it easy to share your memories.