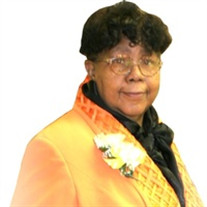 Helen Mae Simpson was born March 19, 1933, in Molina, Alabama to the late Herman and Thelma Simpson, and she was the fourth of six siblings. At the age of 6, Helen and her family moved to Pensacola, Florida. Six years later, at the age of 12, the family moved to River Rouge, Michigan in 1945, where Helen attended the River Rouge Public School system. She later graduated from River Rouge High School in 1951 and began working at Better World Barbecue with her childhood friend Minnie. God used Minnie to introduce Helen to Fred Hill, the love of her life. The day they met Fred had his Army uniform on, he had good looks and a lot of charm to help sweep Helen off her feet. They got married six months later with bells ringing at the court house at 12:00 noon on Saturday, March 31, 1956. Throughout their lives they had some wonderful times taking boat rides on the BobLo boat piling the children in the station wagon and taking long rides and going to the drive-in. Before marriage Helen attended Union Second Baptist Church, and then after marrying Fred she joined Southwestern Church of God and was baptized. Helen used her singing talents as a member of the choir and served as a Choir Leader. With God’s infinite gifts and talents, he blessed Helen to have the voice of a songbird singing praises to God unceasingly. Helen and Fred, Sr. often sang duets with backup vocals by their sons, Fred, Jr., Less and Larry. She continued to be a member where she lived her life, witnessing, and proclaiming the gospel of Jesus Christ until she was called home to be with the Lord. Helen is preceded in death by her only daughter Jezell Hill. Helen departed this life on Tuesday, September 4, 2018, and leaves to cherish her memory, her loving husband; Fred Hill, Sr., six sons; Phillip Hill (Mary), Fred Hill, Jr. (Jackie), Perry Hill, Larry Hill, Less Hill (Patricia), Jameson Hill, one sister; Thelma McMiller, a dear friend; Nadine Lewis, 18 grandchildren, 7 great grandchildren, 1 great-great grandchild, and a host of other relatives and friends.

Helen Mae Simpson was born March 19, 1933, in Molina, Alabama to the late Herman and Thelma Simpson, and she was the fourth of six siblings. At the age of 6, Helen and her family moved to Pensacola, Florida. Six years later, at the age of 12,... View Obituary & Service Information

The family of Helen M. Hill created this Life Tributes page to make it easy to share your memories.

Send flowers to the Hill family.