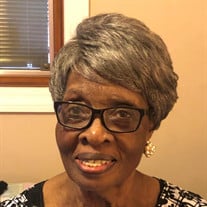 Helen Demetris Allen Harris was born on January 14, 1934, in Mound City, Illinois to the union of the late Otis Allen Sr. and Lucille Moss Allen. She grew up in Mound City with her brothers, Otis Jr. and Clarence, and her sister, Mary. In 1951, Helen graduated from LoveJoy High School and later that same year married Henry Harris. Henry and Helen later moved to Jackson, Michigan and lived there for over 60 years. From this union, 9 children were born. Henry and Helen were together 42 years before his death. Helen gave her life to Christ. She made sure that her children were in church and serving God and the ministry at Faith Temple Church of God in Christ under the leadership of the late Elder Non Walker, and now Apostle John S. Walker. She loved the Lord and his people. She served faithfully as a Sunday School Teacher, on the Mother’s Board, and did a host of other duties in the church. Education was stressed in the Harris household. Helen went to Jackson Business School; and was thankful that all her children graduated from high school, where some even went on to obtain college degrees as well. She was so very proud of her children, grandchildren, and all their accomplishments. On May 23, 2022, Helen departed this earthly realm and is now resting in the arms of her Savior. After some years of illness, she closed her eyes and went to be with the Lord. She praised God and gave him thanks all the way up until she took her last breath. Helen was preceded in death by her parents, Otis Allen Sr. and Lucille Moss Allen; her husband, Henry Harris; her two children, Ronald Harris and Regina Harris; her brother, Otis Allen Jr.; her grandson, William Duling II; and her granddaughter, Oveda Parker. She leaves to mourn her 7 children, Dr. William Harris – College Park, MD, Henrietta Duling (William) – Jackson, MI, Thomas J. Harris Sr. – Jackson, MI, Henry M. Harris – Jackson, MI, Jerome Harris – Indianapolis, IN, Glenn Harris (Perrmella) – Onsted, MI, and Michele Cooper (Reginald) – Redford, MI; one sister, Mary L. Jackson – Marion, IN; one brother, Clarence Allen – Indianapolis, IN; daughter-in-love, Phyllis Harris – Marion, IN; 18 grandchildren; 16 great-grandchildren; 3 great-great grandchildren; special cousins, Wanda Holmes and Oletha Curling; and a host of nieces, nephews, relatives, and friends; including her special friends whom she thought of as sisters, Ora West and Betty Smith.

Helen Demetris Allen Harris was born on January 14, 1934, in Mound City, Illinois to the union of the late Otis Allen Sr. and Lucille Moss Allen. She grew up in Mound City with her brothers, Otis Jr. and Clarence, and her sister,... View Obituary & Service Information

The family of Helen Demetris Harris created this Life Tributes page to make it easy to share your memories.

Send flowers to the Harris family.