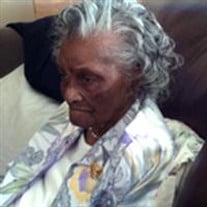 Mrs. Hattie Lee Hardnett was born on July 17, 1931 in Kingston, Georgia to the late Clarence and Elizabeth McCluskey Harris. The family relocated to River Rouge, Michigan where she resided for several years. In March of 1953, Hattie was united in marriage to Robert Hardnett at which time the family moved to Detroit, Michigan. They were married for 45 years before Robert passed away. This union was blessed with: Eugene, Jo-Anne, Diann, Delores, Brenda, David and Donald, Debora, Larry, Lynda and Karen. Mrs. Hardnett was a very strong, yet quiet and gentle woman. She had a loving and generous spirit and spent most of her adult years as a dedicated wife and homemaker. As a young child she and her parents were members of the St. Paul Baptist Church in Kingston, Georgia. She later attended New Hope Baptist Church in Delray, Michigan and greatly enjoyed gospel music. The multi-award winning singer, Shirley Caesar--”The First Lady of Gospel Music” was her favorite artist. She would often sing along in worship to her Lord, Jesus Christ. Some of her favorite songs were entitled, “Jesus, I love Calling Your Name” and “I Remember Mama.” While the children were young, “Momma” as she was affectionately called, found pleasure in volunteering for the Red Cross, the Neighborhood Block Club as well as a voter registrant. She also enjoyed spending time with family and close friends. Momma was employed part-time at the Bancroft Nursing Home. She also provided care for the elderly in their home. Around the same time, she took several culinary classes at the Breithaupt Vocational Technical Center in Detroit, Michigan in which she greatly delighted. As her children became adults and grandchildren were born, “Gran” as she was lovingly called, enjoyed crocheting, sewing and knitting warm scarves and mittens for the entire family in the winter and making homemade ice cream in the summertime. She was an avid gardener and loved to read, recite poetry and quote scripture. In addition to her husband, Robert, Mrs. Hardnett is preceeded in death by her twin sons, David and Donald and her sister, Gertrude, son-in-law Stefon, broter-in-law Irvin, Jr., stepchildren Robert, Annie, Michael and Charles. After a lengthy illness, in the comfort of her home and surrounded by her children, she quietly went home to be with the Lord. She leaves to cherish her memory, her children; Eugene, Jo-Anne, Diann, Delores (Otis), Brenda, Debora (Andre), Larry, Lynda, Karen (Kevin), sister; Catherine Johnson, sister-in-law; Catherine Cameron of Perry, Georgia, stepdaughter; Rosa Smith both of Perry, Georgia; thirty-four grandchildren, four great grandchildren, one great great granddaughter, several nieces and a nephew. One of Mommas favorite sayings was: “I’ll see you in the morning, good Lord willing and if the creek don’t rise.” And we resoundingly say, “Yes, we will see you in the morning!” A favorite scripture passage was Psalms 23.

Mrs. Hattie Lee Hardnett was born on July 17, 1931 in Kingston, Georgia to the late Clarence and Elizabeth McCluskey Harris. The family relocated to River Rouge, Michigan where she resided for several years. In March of 1953, Hattie was united... View Obituary & Service Information

The family of Hattie Lee Hardnett created this Life Tributes page to make it easy to share your memories.

Send flowers to the Hardnett family.