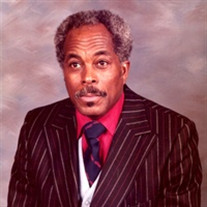 George Louis Purifoy, Sr. was the first born of three children to the union of the late George Wesley Purifoy and Beatrice Purifoy on November 29, 1927 in Birmingham, Alabama.  The family moved to Snow Hill, Alabama in 1934 where he attended Snow Hill Institute, graduating in 1949. George, Sr. met the love of his life, Paralee Stinson at the Clanton Church of God Camp meeting in 1949 and they married in 1950. To their union two sons were born, George Louis, Jr. in 1951 and Frederick Jerome, I in 1952.  In 1953 George, Sr. and Paralee moved their family to Detroit, Michigan seeking employment for a better life in the automotive industry. However, due to the conditions at that time he needed to seek employment, working at Bryant and Wastewater, Merchants, and Ethel Corporation for 10 years before finally landing permanent employment with AMC/Chrysler. He retired in 1989. George, Sr. was a faithful servant at Wisconsin Ave. Church of God as the Sunday- School Superintendent, a Trustee, Janitor as well as the excellent Bass of the Brotherhood Quartette for several years. Moreover, he was a LIFETIME USHER as he transitioned from Wisconsin Church of God, Lighthouse Church of God and then to Greenfield Ave. Church of God.  In 1963 the family made their home on Santa Barbara where they spent many good years! George, Sr was quiet yet always had a concern for others and encouraging words. He loved to drive, enjoyed chauffeuring, hunting in the thick woods of Snow Hill, Alabama his 1978 Lincoln Mark Continental VI car, as well as his deep love for attending his House/Hill Family Reunions. On March 13, 2018 George, Sr., quietly made his transition at Harper Hospital to receive his great reward. Preceding George, Sr. in death was his beloved wife of “66 years” Paralee Purifoy, son Frederick Jerome, sister Vesta Key, and Great Granddaughter, Payeton. Leaving to cherish George, Sr's memory: One son; George Lewis Purifoy, Jr., one grandson Frederick J. Purifoy II (Geralyn), two granddaughters, Camille Purifoy and Crystal Purifoy, three great-grandchildren, Jamal Mitchell, Mawasi and Aleiya. One brother; Osborne Purifoy, Sr., one half-sister; Dorothy Ruth, one daughter-in-love; June Purifoy. Godchildren; Rosalyn Roseboro, Anna Roseboro, Levoid Vickers, Jr. and host of other family members and friends.

George Louis Purifoy, Sr. was the first born of three children to the union of the late George Wesley Purifoy and Beatrice Purifoy on November 29, 1927 in Birmingham, Alabama.  The family moved to Snow Hill, Alabama in 1934 where he attended... View Obituary & Service Information

The family of George Louis Purifoy, Sr. created this Life Tributes page to make it easy to share your memories.

Send flowers to the Purifoy, family.