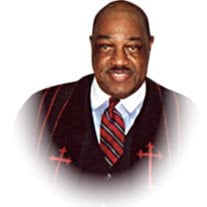 George Sewell Marshall was born in Wetumpka, Alabama, on August28, 1935, the first of seven children of Rev. David L. and Ruby Leonard Marshall.He was educated in the Detroit Public Schools and graduated from NorthwesternHigh School in 1956. He has the distinction of being one of the first converts ofMetropolitan Church of God (Danish Brotherhood Hall) in 1954 during the pastorateof the Rev. James Earl Massey. Converted and baptized at Metropolitan Churchof God, he was active in the youth fellowship there and was later recommended asa missionary from Metropolitan Church of God to Bermuda, West Indies. Georgewas united in marriage to Vermell Autrey in Detroit, Michigan in 1957. Their unionwas blessed with two daughters, Felecia Marshall in 1961, and Lisa Marshall in1965. Felecia preceded him in death in 1990. Having sensed a call to ministry, George studied at Detroit Bible College andWayne State University in Detroit, Michigan and continued his studies at CuyahogaCommunity College and Cleveland State University in Cleveland, Ohio. George wasawarded an honorary doctorate from the California School of Urban Ministry. Heleft Detroit in l979 to pastor Euclid Avenue Church of God in Cleveland, Ohio. After25 years in Cleveland, he and Vermell returned to Detroit. He was ecumenical in hisrelationships, and was respected and welcomed across denominational lines; in fact,he was a visiting pastor at Good Shepherd Lutheran Church in Detroit, Michiganuntil they found permanent leadership. George’s health problems began duringhis second period of service in Detroit, so he relinquished leadership at WisconsinAvenue Church of God and became a member at Southwestern Church of God.Diagnosed as diabetic, his illness received strategic and prolonged treatment, butwith no lasting effect. He was in Beaumont Hospital when he made his transitionduring the morning of Saturday, February 29, 2020 with his wife and daughter athis bedside. George was an avid reader and maintained his own personal library. He was afamily man who adored his wife, daughters and grandchildren. He spoke aboutthem with a sense of pride and affection. He leaves to mourn: his cherished anddevoted wife, Mrs. Vermell Marshall; his loving daughter, Mrs. Lisa Hamilton(Scott); three treasured grandchildren: Olivia Vermell, Chad Marshall, and FeleciaMarie Hamilton; two brothers: Rev. Robert D. Marshall (Joyce), and Rev. DavidL. Marshall, Jr. (Diane); two sisters: Mrs. Gladys Marshall Ellis (Earl), and Ms.Gwenetta Marshall Brooks; four sisters-in-law: Mrs. Frettie Fontenot, Rev. ArdellThurman, Mrs. Mary Marshall, and Mrs. Carolyn Marshall and a host of nieces,nephews, relatives and friends.

George Sewell Marshall was born in Wetumpka, Alabama, on August28, 1935, the first of seven children of Rev. David L. and Ruby Leonard Marshall.He was educated in the Detroit Public Schools and graduated from NorthwesternHigh School in 1956.... View Obituary & Service Information

The family of George Sewell Marshall created this Life Tributes page to make it easy to share your memories.

George Sewell Marshall was born in Wetumpka, Alabama, on August28,...

Send flowers to the Marshall family.