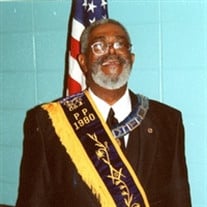 George Kevel Fritz, Sr. was born on February 2, 1937 in Montgomery, Alabama. He was the sixth of six children born to the late Andrew Fritz, Sr. and Hattie Alston-Fritz. He spent his young childhood years in Alabama and later relocated to Ecorse, Michigan with his family. George attended Ecorse Public Schools and excelled on the Football team, Track and the Ace High Diving team. He was a devoted member of Mount Zion Missionary Baptist Church serving faithfully on the Deacon Board. After high school, George enlisted in the United States Navy where he received an Honorable discharge. Furthering his education after the Navy, he attended Cass Technical School taking up the trade of pipe fitting. George was a hardworking man. He put his trade to work as an employee at Great Lakes Steel retiring after 35 years. George was very active in the church and community. He served as Senior Warden and High Priest at the Binford Lodge No. 26 and the Composite Lodge No.17. George was an avid golfer and bowler having bowled at least two (300 games). The last league he bowled with was the senior league in 2006. He also enjoyed the outdoors and was a fisherman by sport. He was also known for playing domino's with his brothers, nephews and friends. George met and Married Vonceil “Honey” Stroud-Fritz, his faithful wife and friend, on October 23, 1964. They spent a life together and were only parted by her death in 2002. George later met and married Valerie James-Fritz, his devoted wife and caretaker on December 3, 2006. They remained married until the Lord saw fit to take him home on the afternoon of June 28, 2017. In death, George will be reunited with his late wife, Honey, daughter; Elaine Brown (Larry), great-grandson; Xzavier Alongi and siblings; John, Sr. (Clara), Hattye (Essex), Robert, and Ruth Margaret. George was a man with courage, charm, strength and wisdom. Most importantly he was a family man. He leaves to cherish his memory, his wife; Valerie Fritz, three sons; Gregory Giddens, George Fritz, Jr. (Robin), and Luther James, Jr., five grandchildren; Larry Brown, II (Kelda), LaNeisha Brown, Alexander Fritz, Rachel Fritz, Precious Giddens, Jessica James, and Luther James, III, four Great- Grandchildren; Nico Alongi, Liam Brown, Abi and Samuel Fritz, brother and friend; Andrew Fritz, Sr. (Mattie Belle), an Aunt; Thelma Alston- Lane and mother-in-law; Loretta Jackson, brother-cousins, Manual Warren and Ebsen Smart, and a host of nieces, nephews and friends. Rejoice in knowing that George’s spirit will live on until the end of time.

George Kevel Fritz, Sr. was born on February 2, 1937 in Montgomery, Alabama. He was the sixth of six children born to the late Andrew Fritz, Sr. and Hattie Alston-Fritz. He spent his young childhood years in Alabama and later relocated to Ecorse,... View Obituary & Service Information

The family of George Kevel Fritz created this Life Tributes page to make it easy to share your memories.

Send flowers to the Fritz family.