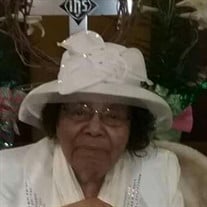 The Life and Legacy of Geneva Myrtle Johnson Embraced by her family at her home in Jackson Michigan, on Monday, February 15, 2021 Geneva M. Johnson gained her wings to be with our Lord 17 days before her 92nd birthday. Geneva was born the 3rd child to the union of John A. Pryor and Bessie (Woolfolk) Pryor on February 27, 1929 in Madison, Illinois as Geneva Pryor. She was preceded in death by her parents, twin daughters Dianna (Hurt) Sanders and Diann Hurt, son-in-law Robert Pearson, great-grandson Isaiah Johnson, and siblings Nathalee Graham, Leonard Pryor, Leon Pryor, Christine King, and Barbara Johnson. Geneva Johnson grew up in a small town called Villa Ridge, Illinois, also known as Pryor Town. She was raised with deep roots to value family and church. She had the honor of being married to Dexter Hurt, who accidentally died at an early age. Their union was blessed with four Children, Phyllis, twins Dianna and Diann and Dexter. After being a widow indeed, she met and married Robert Johnson, from Olmsted, Illinois. This union graced them with four sons, Warren, Stanley, Emerick and Craig. With much love and dedication, she cared for him until he died in November 1983, after a brief battle with cancer. Prior to Elder Johnsons’ death, he founded Greater Philadelphia COGIC with Mother Geneva Johnson, alongside of him in 1981. She served as well as supported the Sunday School Dept.; Prayer and Bible Band; Home and Foreign Mission, YPWW and the Mothers Board. She continued her passion, deep roots, and love for the church with her family. One of her greatest joys was sharing the word of God and being one of his most faithful witnesses. She was known in the city as the COOKIE LADY and the SWEET POTATO PIE LADY, making and selling hundreds of pies in her lifetime. Much time was spent at church with family playing the piano, singing, praising the Lord, and cooking huge dinners. District Missionary Johnson served in District #4 for many years and in various capacities, District Secretary and also Chairlady for the District Missionary. After the inception of Greater Philadelphia and the filling of the vacancy of District Missionary Delores Todd, Mother Johnson was elevated to serve as District Missionary of District #4 alongside Supt. Henry Lyons, where she served faithfully. Her service was not just for the local and District, she was just as supportive in the First Ecclesiastical Jurisdiction of SW Michigan, under the leadership of Bishop John Henry Sheard and Jurisdictional Supervisor of Women, Mo. Regina Rose Edwards. After her long and faithful tenure as District Missionary, she asked the mantle to be passed and was recognized as District Missionary Emerita Geneva Johnson. Leaving to continue the legacy, celebration of her life, and memory are one sister, Naomi Humes from Gary, Indiana, six children; Phyllis Pearson from Holly Springs, Mississippi, Dexter (Sharon) Hurt, Warren (Zetta) Johnson, Sr., Stanley Johnson, Sr., Emerick Johnson, Craig (Rita Arnold) Johnson all from Jackson, Michigan, and daughter-in-love, Gwendolyn Johnson from Alpharetta, Georgia, along with a host of grandchildren, great-grandchildren, great-great-grandchildren, nieces, nephews, and cousins. Her Greater Philadelphia COGIC family will forever remember the life, legacy, and love of Mother Geneva Johnson.

The Life and Legacy of Geneva Myrtle Johnson Embraced by her family at her home in Jackson Michigan, on Monday, February 15, 2021 Geneva M. Johnson gained her wings to be with our Lord 17 days before her 92nd birthday. Geneva was born the... View Obituary & Service Information

The family of Geneva Myrtle Johnson created this Life Tributes page to make it easy to share your memories.

The Life and Legacy of
Geneva Myrtle Johnson