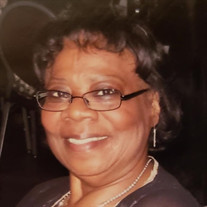 Gaynell (Mallory) Washington entered into this earthly world on October 30, 1939 to the union of Dorothy (Hargrett) Mallory and Harry Mallory. At a young age, she went to live with her maternal grandparents, Lucinda and Leon Hargrett Sr. She lived in a very spiritual home and attended church on a regular basis. Church is where she discovered her love of God and music. Eventually, Gaynell moved to Chicago, Illinois where she graduated from John Marshall High School and went on to attend college. In 1960, she met and married Jimmie Washington. That same year she started a career at the United States Postal Service. The couple started a family while living and enjoying life in Chicago. They had two beautiful children, Dennis and Rosalyn, before a job opportunity drew them to Mount Clemens, Michigan. Shortly after moving to Michigan they added to their family with the surprise addition of twins, Rodney and Steven. Gaynell soon began a career with the State of Michigan. She worked hard and was promoted to supervisor, which led her to move to Grand Rapids in 1980. After 28 years of faithful service she retired from the State of Michigan and moved to Florida. In Florida Gaynell worked part-time to supplement her love of traveling, which allowed her to see the world. Traveling was her favorite pastime, as well as being a faithful member of Tabernacle Missionary Baptist Church where she joyfully sang in the choir and attended Sunday school faithfully. Gaynell came back home to Michigan to be with her children; whom she loved dearly, living out her final days amongst beloved family. Gaynell departed this world on July 22, 2020. She leaves behind her memories of love and laughter with her four children; Dennis Washington, Rosalyn (Edwin) Bolds, Rodney (Ramona) Washington and Steven Washington, two siblings; Loretta Jones and Michael (Debra) Hayes, 11 grandchildren, 7 greatgrandchildren, and a host of nieces, nephews and cousins. Gaynell was preceded in death by her special uncle, Ferdinand Hargrett.

Gaynell (Mallory) Washington entered into this earthly world on October 30, 1939 to the union of Dorothy (Hargrett) Mallory and Harry Mallory. At a young age, she went to live with her maternal grandparents, Lucinda and Leon Hargrett Sr. She... View Obituary & Service Information

The family of Gaynell Washington created this Life Tributes page to make it easy to share your memories.

Send flowers to the Washington family.