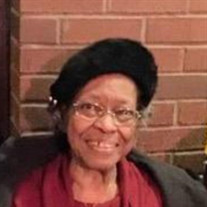 Frettie Margaret Fontenot was born on March 25, 1932 in Detroit, Michigan at Henry Ford Hospital to the union of J.C. and Argather Autrey. She was the eldest of three children who grew up in a loving and caring home. After graduating from River Rouge High School in January, 1951, She was employed by the Department of Defense (DOD) and later at BASF Wyandotte Chemical as a secretary. Frettie accepted Christ at an early age (while still in high school) and was baptized at Palmerston Street Church of God, in River Rouge, Michigan. At the same church, in April 1957, Mom married the love of her life, Andrew Fontenot. They celebrated 61 years of marriage, until his death in January 2018. Their union was blessed with six children: Andre, Michelle, Colette, Sybil, Alvan and Allan, twin brother of Alvan, who preceded her in death. She raised her children in the fear and admonition of the Lord. She was a devoted and faithful member of Southwestern Church of God under the leadership of Pastors, Benjamin F. Reid, Lawrence P. Wyatt and Jack Perkins. During that time, she served as secretary, to them all. She was affectionately called, Sis. Frettie, Sis Fontenot and Mother. She served faithfully on the Usher Board for over 40 years, also sang in the choir and was a member of the Kitchen committee. Mom was the matriarch of her home, a devoted wife and mother to her husband and children. But the role that gave her the greatest joy was being “Granny” to Monique, Marcus and Morgin whom she dearly loved. Every year, she looked forward to taking her children and grandchildren on vacation to Louisiana to spend time with family. Louisiana was her home away from home. If you knew her, you knew how content she was just sitting, in the country, with family and dear friends sharing in conversation and shelling peas. Other pastimes she enjoyed was watching cartoons and playing word games such as, “Mahjong” and “Word Search.” Mom’s love for her family was displayed the most when you saw her in the kitchen. At any given day, you may find her preparing vegetables from her garden or cooking her children’s favorite food, sweet potato pies, peach cobbler, seven-up cake, greens, yams, banana pudding and homemade rolls… Everything she made was delicious! There were those who would come by “Sis. Fontenot’s” knowing, she would be cooking or had already cooked, and just hoping she would ask, “Have some supper?” Her doors were always open to anyone in the neighborhood. Even her front porch became the “hangout” for not just her own children, but the neighborhood kids, as well. Moms’ capacity to love was endless. Everyone had a special place in her heart. She was a gentle, caring and thoughtful soul. Once you have met her, you were never the same again. On September 5th, very early in the morning, God called Mom home to eternal rest with him and Daddy. She always spoke about the scripture she said God had given her: Isaiah 41:10. “So do not fear, for I am with you; do not be dismayed for I am your God. I will strengthen you and help you; I will uphold you with my righteous right hand.” And, God has definitely been true to His word during her health challenges over the years. Loving memories of Mom will be cherished by her beloved children: Andre, Michelle, Colette and Derrick Samuels, Sybil and Dennis Kirby, Alvan and Sheila Fontenot and adopted son & daughter, Timothy Taylor and Ellen Sapp; five grandchildren: Monique, Marcus and Morgin Samuels, Janea and Tre’ Miller, two sisters: Ardell Thurman and Vermell Marshall and honorary sister, Brenda Palmore three sister-in-laws, Bernice Brown, Baton Rouge, LA, Lubertha Lindsey, Orange, TX; and Lubertha Harris, Palmetto, LA; and one brother-in-law, Carlton Hardy, Palmetto, LA. Her memory will also be cherished by a host of nieces, nephews, adopted sons and daughters and other relatives, dear friends and her church family.

Frettie Margaret Fontenot was born on March 25, 1932 in Detroit, Michigan at Henry Ford Hospital to the union of J.C. and Argather Autrey. She was the eldest of three children who grew up in a loving and caring home. After graduating from... View Obituary & Service Information

The family of Frettie Fontenot created this Life Tributes page to make it easy to share your memories.

Send flowers to the Fontenot family.