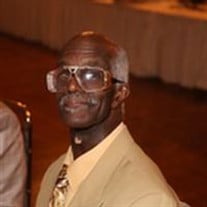 The celebration of life began for Frederick Jerome Purifoy, I on December 9, 1952 in Montgomery, Alabama to parents George, Sr. and Paralee Purifoy. On October 23, 1953 the Purifoy family moved to Detroit Michigan. Fred attended Palmer, Custer, and Pasture Elementary Schools, then Hampton Middle School, and graduated from Mumford High School in 1970. Then he continued his education at Highland Park Community College where he received his Associates degree in Business Administration. In the midst of him attending college Fred was drafted and served in The United States Army from September 1972 to September 1974. At an early age Fred was raised in the church and introduced to the Lord. Fred received Christ, first by joining and being baptized at Wisconsin Avenue Church of God, he then transitioned to Greenfield Avenue Church of God in 1981. As Fred continued his journey in life, he married June Denise Hawkins, to that union two children were born; Frederick, II (Jamal) and Camille Rachelle were born, and grandson Jamal Mitchell. “Big Fred” was employed with the Big 3, he started at the McGraw Glass Plant where he worked thirty-two years, then transferred to the Axle Plant for four years. During his thirty-six years of employment with Chrysler, “Big Fred” had become a chaplain through the UAW Local. He retired from Chrysler in 2009. Being the busy, hardy man that he was, “Big Fred” couldn’t sit still. So he started working with ABM which was contracted thru Neiman Marcus, where he became and met new friends. He was a phenomenal roller skater, and spent many Friday nights attending skating parties. He never got too old to roller skate. At Greenfield Ave. Church of God, “Big Fred” was in the gospel choir. He was the lead and loudest tenor in the section. He served as an usher, choir member, and trustee and wherever help was needed. “Big Fred” was a kind, warm hearted, generous man who loved the Lord and his family along with anything sweet to eat. He leaves to cherish his memories; parents George, Sr. and Paralee Purifoy, children; Camille Purifoy and Frederick Purifoy, II (Geralyn), only grandson; Jamal Mitchell, brother; George Purifoy, Jr., uncle; Osborne Purifoy, Sr., godchildren; Curtis Austin, Jr., Kenisha Evans, and Kristina Savage and a host of other family, friends, and co-workers.

The family of Frederick Jerome Purifoy, Sr. created this Life Tributes page to make it easy to share your memories.

The celebration of life began for Frederick Jerome Purifoy, I...

Send flowers to the Purifoy, family.