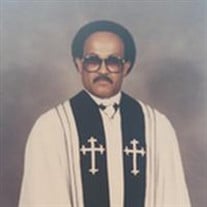 Pastor Eugene Odie Parker was born in Jackson, Michigan on July 31, 1937, to Loy and Goldie Parker, the fourth of five children. He went to his heavenly home on Friday, May 13, 2016. Pastor Parker was proceeded in death by his parents and two sisters Yvonne Thompson and Peggy Johnson. Eugene started singing when he was five years old, and the principal of the school would call him into her office to sing for her. He would sing, “I Beat the Devil Running and I’m So Glad” as this was her favorite. This was the beginning of a life in Christ and an abundant ministry. During his youth Gene was a member of First Church of God in Christ. He first accepted the Lord and was saved at the age 20 by his soon to be father-in-law, Pastor Non Walker. He served under Pastor Non Walker as Assistant Pastor and Minister of Music; he played the organ, trumpet, and bass violin, and sang many solos. As a young man, Elder Parker and the late Pastor Larry M. Trice, Sr., were best of friends and singing partners, they were known as, “The Sons of Thunder.” Elder Parker remained at Faith Temple until leaving to assist Pastor Larry M. Trice, Sr. at Pentecostal Outreach, where he served until 1984 when he was called to pastor First Born Church of God in Christ, Jackson, Michigan. The church soon outgrew its location on E. Michigan Avenue and moved to Tomlinson School until the purchase of the church on Greenwood Place that became Canaan Land Temple, “the church where everybody is somebody”. Canaan Land Church operated a Soup Kitchen which served the community for many years. Pastor Parker continued to minister and pastor at Canaan Land Temple until he retired in 2007. Upon his retirement Pastor Parker joined Faith Temple Word of Faith Ministries under Pastor John Walker his brother-in-law. Pastor Parker was an active community member, serving on several boards which included the Jackson County Medical Care Facility, Aeroquip Credit Union, Department of Social Services, as well as Chaplain for the State Prison of Southern Michigan. Pastor Parker had a fun side as well, he was known as a jokester and loved to laugh! He loved going out to breakfast, shopping and travelling. He leaves to cherish his memory his loving wife Theresa with whom he would have celebrated 59 years of marriage on July 27, 2016, his “three sons” Eugene/Geno Parker (Janet), Mark Parker (Juanice), and Barron Parker; daughter-in-love Kimberly Nichols (Michael); brother Lloyd ‘Sonny’ Parker (Jean), and sister Jackie Harrell. Papa Gene was blessed with many grandchildren: Brandon Berry, Ashley Parker-Ozier (Roy), Joshua Parker, Aaron Shelton, K’maia Shelton, Mireya Parker, Caleb Parker, Antonio Rush, Danielle Parker, Jaya Rush, McKenze and McKenna Parker, Na’Riyah Parker; great-grandchildren: Zinaejah Ozier, Zaidan Ozier and Orhion Parker. Sister-in-laws: Delores Todd and Angeline Trice, brother-in-law John Walker (Marilyn). A host of nieces, nephews, cousins, Godchildren, and Canaan Land Temple church family.

Pastor Eugene Odie Parker was born in Jackson, Michigan on July 31, 1937, to Loy and Goldie Parker, the fourth of five children. He went to his heavenly home on Friday, May 13, 2016. Pastor Parker was proceeded in death by his parents and two... View Obituary & Service Information

The family of Pastor Eugene Odie Parker created this Life Tributes page to make it easy to share your memories.

Send flowers to the Parker family.