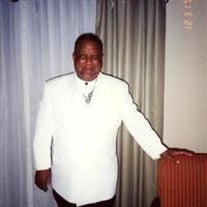 Ernest Herbert Rodgers, Sr. was born on May 31, 1938 to the union of Daisy and Herbert Rodgers in Buckingham County, Virginia. Ernest was an avid outdoorsman who enjoyed such activities as fishing, hunting, and gardening. He also loved music, singing and dancing. He was a member of several music groups over the span of his lifetime; most notably, the male chorus at Second Mt. Carmel M.B.C. and the Detroit Motor City Singers. Ernest was an incredible cook as well. He loved big family meals; his most requested dish was chicken and dumplings. He was well liked by his community, fellow co-workers, and friends. He was a people person who never met a stranger. He would often spark up a conversation with whoever happened to cross his path; at the super market, a baseball game, or even at an amusement park. Ernest had the gift of gab. He loved young people. He would often include some of the neighborhood children to join his family whenever they’d go fishing, to the beach, or any number of fun-filled activities. He mentored a number of those children and most viewed him as a father figure. Ernest accepted Christ at an early age and was baptized while living in North Carolina. He proudly served as a Deacon while attending Second Mt. Carmel M.B.C. He loved driving whether it was for work or for pleasure. He would sometimes drive for a living; most notably for, the Faygo Beverage Company. Following his passion for cooking, he also worked as a baker at Farm Crest Bakery. As an entrepreneur, he owned such businesses as the Bus Stop Restaurant, and Rodgers BMW Limousine Services. In August of 1968, he met and later married his wife of nearly 52 years, Mary Lee Rodgers. From this union, two incredible children were born, Ava Marie, and Ernest Herbert, Jr. Ernest transitioned from this life on March 13, 2020 at approximately 4:38 p.m. with his son Jr. at his side. He leaves to cherish his memory, his devoted wife; Mary Lee Rodgers of Chesterfield, Michigan, his son; Ernest Herbert Rodgers, Jr of Detroit, Michigan, his daughter; Joyce Baylor (Raymond) of Philadelphia, Pennsylvania, his daughter; Alma Jean Simpson of Dillwyn, Virginia, his son; Herman Bolden of Cumberland, Virginia, his daughter; Ernestine Rodgers of Philadelphia, Pennsylvania, his daughter; Samantha Colbert of Detroit, Michigan, his brother; Andrew Rodgers of Philadelphia, Pennsylvania, his sister; Georgiana Scruggs of Newport News, Virginia, along with a host of nieces, nephews, and grandchildren notably Madison and A’Vaughn Rodgers of Harrison Twp., Michigan. He was preceded in death by his parents; Daisy and Herbert Rodgers, his sister; Helen Rodgers, his sister; Etta Mae Corley, his brother; Delaney Rodgers, his daughter; Ava Marie Rodgers, his son; Steven Rodgers, and his son; Dwayne Williams.

Ernest Herbert Rodgers, Sr. was born on May 31, 1938 to the union of Daisy and Herbert Rodgers in Buckingham County, Virginia. Ernest was an avid outdoorsman who enjoyed such activities as fishing, hunting, and gardening. He also loved music,... View Obituary & Service Information

The family of Ernest Herbert Rodgers, Sr. created this Life Tributes page to make it easy to share your memories.

Send flowers to the Rodgers, family.