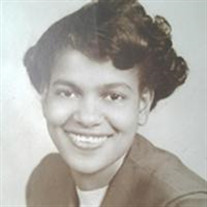 Scroll of Life Sunrise: Mother Emma Howard Arnell Keene, 87, was born May 8, 1928 to Robert and Sadie (Martin) Arnell in Columbia, Tennessee. Her Dash: Mother Keene graduated with honors from College Hill High School in Columbia, Tennessee. Her Pepsi-Cola scholarship started her academic journey at Fisk University in Nashville, Tennessee. There, Mother Keene studied and majored in Music where she graduated Cum Laude, 1951. While at Fisk University, Mother Keene sang with the Fisk Jubilee Choir. After receiving her degree, she began teaching in the Columbia Tennessee School System, until she relocated to Detroit, Michigan. She received her Masters Degree in Education from Wayne State University, and taught in the Detroit Public School System for 35 years. Mother Keene was united in holy matrimony to the true love of her life, Bishop Connie L. Keene, Jr. and to this union six children were born. Timothy Robert and Yolanda Julia, Clayton Luther, Clinton Luther, Connie Luther, III, and Kenneth Arnell. She was a devoted, loving and caring wife, working side by side with her husband in the ministry. She loved drawing, reading and journaling. Most of all, she adored her family. The grandchildren and great-grandchildren held the largest portion of her heart. Working in the Vineyard: Mother Keene was a longtime member of the Church of God. She accepted Christ at an early age, and was baptized in Duck River in Columbia, Tennessee. As a child, she began playing the piano for her home church in Columbia. She and her husband, the late Bishop Connie L. Keene, Jr. pastured the Northwest Church of God for 27 years. She introduced cantatas, anthems and hymns to the choirs of Northwest. She shared her love and mastery of playing with the Jubliee and Women’s Choir, as well as other services and ceremonies, this she did up until her death. Mother Keene also held the title of National First Lady during her husband’s tenure as National General Overseer of the Churches of God, Sanctified, Inc. She also served as the president of the National Ministers’ Wives Guild for several years. Sunset: On April 17, 2016, while at home. Mother Emma Keene being the soldier of God she was, heard the bells ring and received the call from heaven saying, “well done thy good and faithful servant” she put on her robe, spread her wings and went to her mansion in the sky. She was preceded in death by her parents, and her siblings: Benjamin, Thaddues, Nannie, William B., Claude Arnell, and her spouse, Bishop C.L. Keene, Jr. Mother Emma leaves to cherish her memory: (first set of twins) Timothy Robert and Yolanda Julia, (second set of twins) Clayton Luther (Josephine), Clinton Luther (Barretta), Connie Luther III, Kenneth Arnell (Rachel). Grandchildren: Stephanie (Carlos) Jackson, Dana (Kevin) Kennedy, Darrick (Tiffany) McGary, Janeese, Lauren, Timothy, Jr., Clinton B., Chloe, Seth, Sara, Noah, Zion, and Ezra Keene. Great grandchildren: Daijah, Se’onna, Trinity, Kanye, Sofia, and Reagan. Her sisters: Elizabeth Greene of Indianapolis, Indiana, Thenia Perry of Nashville, Tennessee. Sister-in-laws: Amanda Arnell of Columbia, Tennessee and Jean Arnell of Nashville, Tennessee, Inez Arnell of Toronto, Canada. She had many nieces and nephews, along with very special friends – Earle and Gloria Powell, Robert and Rebecca Henry; God-daughter, Linda Causey and God-son Lonnie Ollison.

The family of Emma Howard Keene created this Life Tributes page to make it easy to share your memories.

Send flowers to the Keene family.