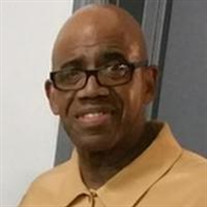 Elder Ronald John Stewart Brown, was born on August 1, 1948. He was the first of six children born to Willie James and Dorothy Mae Brown in Highland Park, Michigan. He spent most of his childhood in Detroit, Michigan; graduating from Pershing High School in 1966. In March of 1971, Elder Brown enlisted in the United States Army where he served faithfully, receiving an honorable discharge in February of 1977. During this time, he also served in the Vietnam War, stationed there from Sept 1971 unto April of 1972. Upon his return from active duty, Elder Brown began attending Solomon’s Temple Apostolic Faith Church, where he confessed his faith in Jesus Christ and was baptized in 1977. He served there for several years. Elder Brown often spoke of his love and gratitude for the teaching and impartation he received from the late Bishop W.L. Bonner, along with the entire Solomon’s Temple Church family. In August of 1996, he was ordained as an Elder. On June 2, 2001, Elder Brown was joined in holy matrimony with Ana Cristina Tejeda. They attended and served at Jesus Apostolic Faith Church, where Reverend Mary Washington is the pastor. Elder Brown truly loved the Lord with his whole heart. No matter if he was cooking, driving a semi, or walking his post office route, he kept Jesus with him all of the time. He treasured the active presence of the Holy Spirit in his life and was subject to “Catch the Spirit” at any time! In his spare time he read numerous books on Christian living and spent a large amount of his time writing love letters to God. He would often tell his wife, Ana, “Honey, I love you, but when Jesus calls for me, I’m going home to be with the Lord! You see, I’ve got my ticket!” On August 10, 2015, Elder Brown submitted his ticket and took the train to Heaven to be with the Lord! He leaves to cherish his memories: his wife, Ana Brown, five step-children, Alexandra Dominquez (Cesar), Rosanna Hinds (Aramis), Heydi Ash, Edgar Ash and Jesse Ash (Luz); and ten grandchildren, to whom he was affectionately known as “Grandpa Ron.” He also leaves to cherish his memories: Four brothers, Thomas James, Aaron Lee, Jerome Raynard and Berry Kieth (Georgia Leigh). One sister preceded him in death, Linda Rachal Brown. He will be missed by his niece, Breanna, nephews, Lamont, Bryan, Brice, Brendan, Jordan and Jalen and a host of other relatives and friends, including his close friends, Ronald Vickers, Saad Hamama, David Polley and Bernard Greene.

Elder Ronald John Stewart Brown, was born on August 1, 1948. He was the first of six children born to Willie James and Dorothy Mae Brown in Highland Park, Michigan. He spent most of his childhood in Detroit, Michigan; graduating from Pershing... View Obituary & Service Information

The family of Elder Ronald John Stewart Brown created this Life Tributes page to make it easy to share your memories.