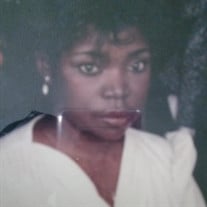 Elaine Marie Rogers was born on May 8th, 1949, in Indianapolis, Indiana. She was the first child born to the late Horace Daniel and Constance Sumner. Her earlier education was in Indianapolis until her family moved to Jackson, Michigan in 1964, where she attended Parkside High School. In 1993 she gave her life to God and started her Christian walk. She attended the Church of God at 140 W. South St, Jackson, Michigan under the pastoring of the late Frank Hampton, Jr. Elaine was the oldest of eight children. She was like a mother to her younger siblings. She often reminded them how she changed their pampers. She was a very caring and loving sister. She did not like being the oldest, especially when she started dating, and had to take her siblings with her. She loved them all very much though. Her sisters were the twinkles in her eyes through life. Elaine was an artist, and began art classes at an early age. She also studied art in college after returning to Indianapolis. Elaine continued to paint and draw through her final days, often asking for paints, brushes, and canvas to be brought to her. She was asked many times by the Pastor to paint pictures for his message to bring a visual to the audience. She wrote plays, created backgrounds scenes, and characters for poems she wrote. You could see her art work around her home, as well as family, and friend’s homes. Elaine loved children, and spent her life teaching them to grow, learn, love God, and become productive members of society. She was a Sunday school teacher and enjoyed that calling immensely. She also worked for many years with the children in the Franklin Homes, teaching them about other cultures, foods, God, and languages. Often her favorite niece Shalonda Parker AKA (Londy, and Shay, Sr.) would join in, when visiting. Elaine spent many years volunteering for Together We Can Make a Difference, and Habitat for Humanity. Elaine was a dedicated and loving mother to her three children. She instilled strong morals, values, respect for others, as well as self-respect into them from the beginning. Her favorite quote was (There is a place for everything, and everything should be in its place). Elaine worked hard to ensure that all of her children were strong, and could stand on their own two feet. Her sons were her pride, and her daughter never left her side from the day she was born, to the day she died. Her daughter protected her fiercely, and loved her more than life itself. Elaine made sure that her children loved, and respected God. Daniel Sumner aka “Danny”- RIP, (wife, Helena Sumner), Robert Sumner-RIP, Tony Sumner, Alexander Sumne, (wife, Sandy Sumner), Brian Sumner, (wife, Suanne Sumner), Tonya Brown (husband, Lester Brown, aka favorite brother-in-law), Ella Parker-White, (husband, Mr. White, aka “Priss”), and Satin Sumner. She leaves her cherished children; Earl Scott Reives aka “Boobie” (wife, Melanie Reives), Neyeko Tamarr Johnson aka “Knikki” (husband, Daniel James Johnson, Sr.), and Lorenzo Dion Rogers aka, “D” (wife, Shontae Rogers). Her grandchildren; Earl Scott Reives 3rd, aka “EJ”, (wife Olfa Reives), Ataiya Reives, Amarie Reives, Davonte Rayshawn Roper, aka “Day Day” (wife, Terrie Roper), Dayenerra Lashay Johnson, aka “Berry”, and Shay, Jr.), Dayo Jauntae Johnson, RIP, Diontae Jauntae Johnson, Dontae Rayshod Johnson, Day’jarryiah Jimmae Johnson, Daniel James Johnson, Jr., aka “Dan Dan” (wife, Alexis aka “Lexi” Johnson, Diazure Jenee Johnson, aka “Azure”, Lorenzo Dion Rogers, Jr., aka “Lil D”, Dionee Rogers, and Jordan Rogers. Her great grandchildren; Davonte Rayshawn Roper Jr, aka “Baby Day Day”, Tamira Tamarr Roper, aka “Tamarr”, Tamya Rayell Roper, A’marrianna Tamarr Johnson, aka “Marri or Tamarr”, Karen Bradshaw, aka “Baby Tae Tae”, Azayvian J. Brown, aka “Zayvi”, Jaila Brown, Emma Johnson, Daniel James Johnson 3rd, aka “Dan Dan”. Her special children; Lafrance Mccullough, aka “Frannie”, Tasha Mccullough, Wendy Matthews, Candace Matthews, Monette Simpson, aka “Money”, her god children; George Brown, aka “Gipp”, Shy Brown, Shawndell Porter, aka “Muscles”, Dorothy Banks, aka “Gail”, Heather Banks, aka “Lena”, Clinton Colvin, aka “Shuggie Bear”, Cassandra Colvin, aka “Shawnie”, and Allen Banks; special friends; Claudia Colvin, Carolyn Moss, Sister Morton, Mother Hall and a multitude of nieces and nephews. An abundance of 2nd 3rd and 4th cousins and a massive amount of other loved ones.

Elaine Marie Rogers was born on May 8th, 1949, in Indianapolis, Indiana. She was the first child born to the late Horace Daniel and Constance Sumner. Her earlier education was in Indianapolis until her family moved to Jackson, Michigan in 1964,... View Obituary & Service Information

The family of Elaine M. Rogers created this Life Tributes page to make it easy to share your memories.

Send flowers to the Rogers family.