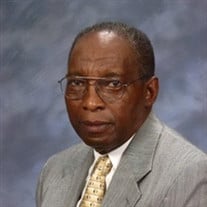 Eddie Thomas, Sr. was born November 29, 1936 in Caruthersville, Missouri to the late Roberta Gardner-Brown. Eddie is preceded in death by his mother, one brother; Floyd Johnson, two sisters; Cinda Mae Pace and Peggy Leathermen, ex-wife; Betty Thomas, and a great-grandson; Joshua Gaston. Eddie worked at Clark Equipment in Michigan where he later relocated with the company to North Carolina in 1984. Eddie worked there until his retirement in 1992 after 33 years of service.  In the 1960's Eddie co-founded the eight teams Mixed Keglers League which grew to twenty-four teams and was part of the foundation of African American bowling in Jackson. Eddie attained the position of Vice President of the Jackson Bowling Association when he moved with Clark Equipment. He continued serving by returning during Christmas holidays to assist with the Spare Memorial Youth Tournament. Eddie also co-chaired this annual event many times. Upon his retirement and return to Jackson, he was reinstated as JBAA Vice President and was voted in, as its President in 1995, serving a two-year term. He was voted a Life member in 1999 and also honored as the Director of the Year. Eddie has bowled 43 consecutive years at the ABC National Tournament. Eddie has been a lifelong member of Second Missionary Baptist Church over 70 years, under Rev. Amos Polk Williams and Pastor Darius L. Williams. He was a member of the Senior Usher Board. Eddie was Marine Corps Veteran. His favorite pastime was traveling, playing cards, bowling, going to the casinos, and attending to the needs of others. Eddie leaves to cherish in his memory, his son; Eddie Thomas, Jr., daughter; Ruth (Thomas) Burke and son; Duane (Joyce) Thomas of Nashville, Tennessee, grandchildren; Lakeshia (LaShawn) Riley, Shania Thomas-Houston of LaVergne, Tennessee, Maurice (Jennifer) Thomas, Lauren Mostiller of Buffalo, New York, Sarah White, Carlos Brown, Dane Burke and Kamaria Burke of Detroit, Michigan, great-grandchildren; Barry, JaRonn, Indira, Noah and Dahayha, special acknowledgement to special friend; Pat Moore, brother; Van Brown, Sr., of Indiana, sister Josephine Lock of Tennessee; brother-in-law Charles Pitts, Sr., godson Jerry Sharpe of Statesville, North Carolina and a host of nieces, nephews, cousins, many other relatives and friends.

The family of Eddie Thomas, Sr. created this Life Tributes page to make it easy to share your memories.

Send flowers to the Thomas, family.