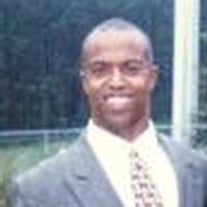 Earl Dicaus Young was born on April 26, 1968 in Camden, Arkansas, to Freddie and the late Corine Young. Earl was the youngest of his siblings, he departed from this life on February 4, 2017 at St. Mary’s Hospital in Saginaw, Michigan. Earl moved to Michigan when he was only four years old. He graduated from Jackson High School. There he was the Main Man on the Basketball Court. He then continued his education at Trinity Valley (Athens, Texas), and Morris Brown (Atlanta, Georgia). Earl had accepted Christ as his savior being united in fellowship. Brother Earl had his own special way to spread the word by sending inspirational quotes to his friends and family. Earl enjoyed the game of Basketball, helping the kids in any way he could, and spreading the word of God where ever he could whenever he could. Brother Earl is preceded in death by his mother; Corine Young, his two nephews; Brazzie Scott and Devin Lamar Young. He is survived by his three daughters; Quaneika Chantae Dentmond Ebonek Shiakayia Dentmond, and Shamyra Williams, grandchildren; Tae’ Shawn Cooper, Tre’Shawn Terrell, Aniyah Terrell, and Joseph Williams, his father; Freddie (Nora) Lee Young Sr. of Jackson, Michigan, two sisters; Yvette (Byron) Williams of Spring, Texas and Frances Young of Jackson, Michigan, and brother; Freddie (Linda) Young, Jr.of Jackson, Michigan.

Earl Dicaus Young was born on April 26, 1968 in Camden, Arkansas, to Freddie and the late Corine Young. Earl was the youngest of his siblings, he departed from this life on February 4, 2017 at St. Mary&#8217;s Hospital in Saginaw, Michigan.... View Obituary & Service Information

The family of Earl Dicaus Young created this Life Tributes page to make it easy to share your memories.

Send flowers to the Young family.