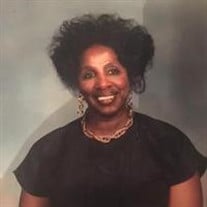 Born Dorothy Marie Upchurch on February 10, 1927 to Reuben and Montreal Upchurch in Paducah, KY. She was the eldest of five children, three brothers who preceded her in death, Reuben Jr., Raymond, and Charles; she is survived by her sister, Martha Lou Harrell. The Upchurch family moved from Paducah to Michigan by way of Illinois in the late 1930’s. They settled in Jackson, MI where Dorothy would attend and graduate from Jackson High School. Being so very progressively minded, she took classes at the local community college. She would study barbering and become a master at her craft. And it was in Jackson where Dorothy would become the first African-American female barber, blazing a trail for many to follow. Dorothy was married in 1946 to McKinley Chatman. To this union they would add three children, McKinley Donnel, Gregory Allen, and Renee Delora. This marriage would dissolve and Dorothy remarried Rodney White. She was preceded in death by her husband, Rodney, and two of her children, Gregory and Renee. Reared in the Church of Christ, she was an active member, fostering a deep love for young people and became a great teacher and coach for all willing to learn elements of drama, poetic recitation, and creative writing. Big Mama, as she was known by many was exuberant, outgoing, and full of life. A vibrant woman of God, she was frequently called upon to display her spiritual gifts of writing and dramatic recitation. She was known to move a crowd with the words of James Baldwin, Martin Luther King Jr, and others. Dorothy was also a prolific writer, sharing her experiences as she was impacted by the historical Black and Civil Rights movements around her. She shared her love of culture, history, and story with young people, often imparting heritage and pride to young and old. Dorothy felt passionately that Black folks should know how far they had come as talented, strong, competent leaders in a world that often told a different story. In addition to her accomplishment as a barber, Dorothy blazed another vocational trail. She was among the first wave of women hired into the Michigan State Correctional Facility. In the early 1970’s she was employed by Jackson Correctional Facility working in the offices, keeping records, and managing administrative duties. She was able to recall and tell stories of tragedy and triumph from behind those walls. She witnessed death and new life of the men whose lives she would touch. She spoke with pride of her ability to help, support, and teach these men, many of whom she knew from childhood and had relationships with their families. Dorothy would climb the ranks within the Correctional Facility becoming a guard. However, one could tell from many stories of her days at The Prison she was more of a guardian than a guard to her coworkers (newly minted women to this work) and the inmates (some she thought of like sons). In addition to this work, Dorothy was passionate for people and human rights serving as a poll worker to ensure voting rights for all. Dorothy was a trail blazer in many respects and worked to ensure that those who were hungry would be fed spiritual and physical food, those who yearned to learn could do so freely and fully, and any who would do good were made aware of their potential to do great. Dorothy is survived by her sister; Martha “Lou” Harrell, two sons; McKinley “Donnie” (Charisse) Chatman and Stacey (Crystal) McClain, one son-in-law; Carl Shannon, nine grandchildren; Kisa (Theresa) McKinney, Angela Bristow, Melanie Shannon, Darnell (Rashonda) Deering, Lamont Chatman, Eric Chatman, Sarah Chatman and Sonya Chatman, nineteen great-grandchildren; Malaysia, Kye, Philip, Mia, Jasmine, Jordan, Joshua, Nicholas, Adrian, Brandon, Alexis, Elijah, Alanna, Linda, Alexis, Xavien, Stephun, Katie, and Tyler, and several nephews, nieces, and other children that were blessed to be considered like her very own. She will be missed by two of her closest and oldest friends, Laverne Bacon and Toni Hartman. Her church family and the entire South Side of Jackson will miss her voice, her laughter, and the vibrancy she brought to every function. All of these and more cherish her memory and will love and remember her forever.

Born Dorothy Marie Upchurch on February 10, 1927 to Reuben and Montreal Upchurch in Paducah, KY. She was the eldest of five children, three brothers who preceded her in death, Reuben Jr., Raymond, and Charles; she is survived by her sister,... View Obituary & Service Information

The family of Dorothy Marie White created this Life Tributes page to make it easy to share your memories.