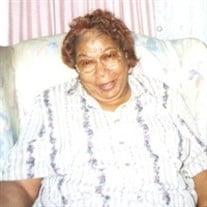 Doris Evelyn Person was born November 18, 1939 in Yazoo City, Mississippi. She was born to James and Willie B. Terrell who preceded her in death. She was their only child. In 1946, when she was 6, the family traveled north to Detroit, Michigan to pursue a better life. There, they joined Fews Memorial C.M.E. Church –where she accepted Christ as her Lord and Savior. As a young adult, Doris became a trailblazer in the church; serving on the steward board and singing in the choir. From that time on, she was an active member of the congregation; for over 65 years, until her health failed. In 1958, after completing a year of college, she was joined in holy matrimony to Hosea A. Person, II. To this union six children were born: Sherida Person, Kimberly Person, Hosea A. Person, III, Gloria Person, Karen Person (who preceded her in death), and Kenneth Person. Doris was a dedicated mother. Her devotion to her children was long lasting and unwavering. As she took care of her family, she also took care of others. She worked at the Taylor Total Living Center as a Nurse’s Aide and later provided housekeeping services for Comfort Suites—until she retired from this position in 1990. After her retirement, she became a devoted grandmother; doting on her grandchildren, just as she did when raising her own. In her spare time: she enjoyed cultivating her garden, reading one mystery novel after the next, traveling nationally and internationally, keeping up with current events both domestic and foreign, and watching Jeopardy –answering the most difficult of questions with ease. Doris departed this life on Friday, August 11, 2017. She leaves to cherish her memory, three daughters; Sherida, Kimberly, and Gloria, two sons; Hosea, III and Kenneth, and three grandchildren; Eboni, Kenneth, Jr., and Hosea, IV. To her children, she was “Mama”. To her grandchildren, she was “Sweetie”. To them, she will be greatly missed and will be forever in their hearts. She also leaves to cherish her memory a host of family and friends.

Doris Evelyn Person was born November 18, 1939 in Yazoo City, Mississippi. She was born to James and Willie B. Terrell who preceded her in death. She was their only child. In 1946, when she was 6, the family traveled north to Detroit, Michigan... View Obituary & Service Information

The family of Doris Evelyn Person created this Life Tributes page to make it easy to share your memories.

Send flowers to the Person family.